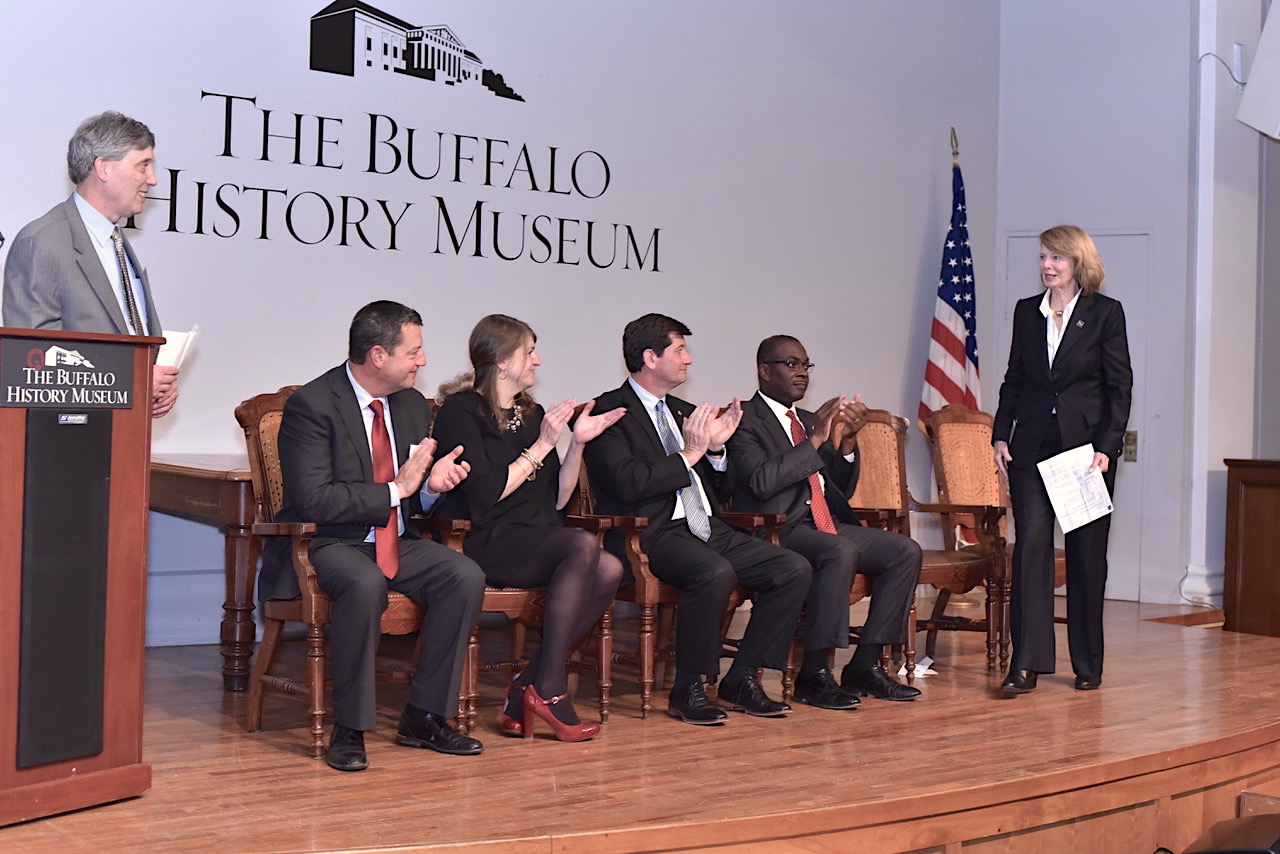 Wed, Nov 15th 2017 08:05 pm
Exhibit opens in The Ralph C. Wilson, Jr. Gallery
"Icons: The Makers and Moments of Buffalo Sports," debuted in The Buffalo History Museum on Tuesday, making it Western New York's first-ever, comprehensive exhibition of Buffalo's professional sports history from 1880 through today.
"Icons" explores Buffalo's rich sports history and investigates the unique connection between fans and their beloved teams. This engaging exhibit features stories and artifacts spanning more than a century. Visitors will explore the origins of professional sports in Buffalo, relive the most unforgettable moments, and remember the teams and people that inspired all.
During the unveiling of the exhibit, Mary Wilson announced the newly restored gallery space would be named in honor of her late husband, Ralph C. Wilson Jr., former owner of the Buffalo Bills.
The Ralph C. Wilson, Jr. Foundation's $600,000 gift to the museum's ongoing "Restore, Reactivate, Reconnect" capital campaign helped fund rehabilitation of the second floor West Gallery of the museum, where the new exhibit is located.
"It is fitting that it was Mr. Wilson's love and passion for football and his beloved Buffalo Bills that ultimately made this grant opportunity possible," said David Egner, president and CEO, Ralph C. Wilson, Jr. Foundation. "We're thrilled that the Ralph C. Wilson, Jr. Gallery will be the home for the 'Icons' exhibit over the next five years, and look forward to the continued transformation of this historic landmark."
Greg Tranter, museum board vice president, loaned artifacts to the museum for the 50th anniversary of the Buffalo Bills exhibit nine years ago, and has since donated his entire collection of more than 6,000 pieces of Buffalo Bills memorabilia to The Buffalo History Museum.
"The history of the Buffalo Bills belongs to all of us here in Western New York, and I have confidence in the museum to steward my collection for generations to come," he said. "For the collection to have a permanent home here and to share it with the community and have part of it on display in 'Icons,' is truly a dream come true."
"Sports are a popular theme at The Buffalo History Museum," said Melissa Brown, executive director. "Memorabilia evokes nostalgia. 'Icons' broadens our demographic, welcoming sports fans to experience our region's rich story."
Sections of the exhibition highlight Buffalo's top iconic sports moments, greatest teams and sports figures. These sections were determined by members of the community through months of surveying. With their help, "Icons" is tailor-made for Buffalo, by Buffalonians.
"The most exciting part of 'Icons' is that it's community-driven," said Steven McCarville, president of The Buffalo History Museum's board of managers. "We want the community to come inside our museum and become collaborators."
Featured within the exhibit will be some of Buffalo's premier sports artifacts, including Wilson's Hall of Fame blazer, Scott Norwood's Super Bowl XXV helmet, the "French Connection's" game-used hockey sticks, and the only known remaining original 1959 Bills jersey.
Founders of Buffalo sports are incorporated in the exhibit, leading with Wilson, his family, and the story of his legacy. Other founding family stories include the Knox, Rich, and Jacobs families. These leaders, their family members and, in some cases, their corporations, support "Icons" and the mission of The Buffalo History Museum.
Buffalo's own Hadley Exhibits, led by Ted Johnson and his team of over 80 employees, developed the "Icons" experience in their 180,000-square-foot facility on Elmwood Avenue, just blocks away from the museum.
Cortina, a world-renowned company, developed the technology within "Icons." The museum has full permission from the NHL, the NBA and the NFL to create interactive components. A series of one-of-a-kind interactive experiences include favorite sports moments and heroes with incorporated film clips, and a test of broadcasting prowess in, "You Call the Play," which mimics game announcers and features game footage.
An "MVP Preview Party" will be held for museum members and the media on Thursday, Nov. 16. Former Buffalo Bills "icon" and Pro Football Hall of Famer Thurman Thomas will attend.
"Icons: The Makers and Moments of Buffalo Sports," opens to the public on Friday, from 10 a.m. to 8 p.m. Admission is free, courtesy of M&T Bank and M&T Third Fridays.
The Buffalo History Museum is a private not-for-profit organization. Visit online at www.buffalohistory.org.
Categories
Home feature NFP Top Around WNY Feature