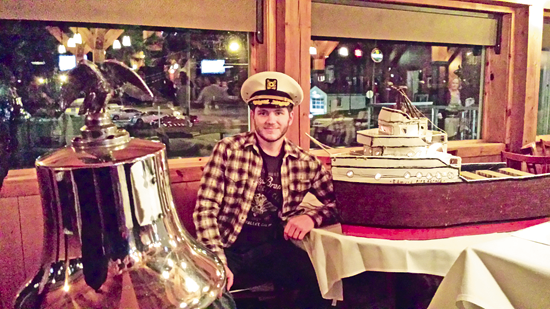 Justin Higner poses with part of his sculpture model of the SS Edmund Fitzgerald.

Fri, Nov 10th 2017 02:30 pm
On Saturday, Wheatfield Town Historian Justin Higner presented a model sculpture of the SS Edmund Fitzgerald at a Tribute for Edmund Fitzgerald at Water Street Landing in Lewiston. The tribute was a multi-sensory and multi-media tribute experience, hosted by artist and Fitzgerald enthusiast, Thomas Paul Asklar, to commemorate the 42nd anniversary of the disaster. The ship was an American Great Lakes freighter that sank in a Lake Superior storm on Nov. 10, 1975. All 29 on board perished.
Higner's model is dedicated to the event and all other sailors and ships lost before it. It's also dedicated to several other personal names of those associated with the Great Lakes. It was built in 2015 for that year's tribute event and comes in four pieces for the sake of traveling convenience. It was built in the span of about two months, is 12 feet, four inches long, nearly two feet wide, weighs a collective 40 pounds, and is the 234th member of a custom art collection dating back to 1994.
Higner also had the honor of reading the names of victims as a bell, borrowed from the local fire hall, was rung for each person and a last 30th ring was rung for all lost ships and sailors on the Great Lakes and for the recent victims of the USS Fitzgerald and USS John S. McCain.
Higner, who has produced other model sculptures, said, "I have built mostly passenger and cruise ships of varying styles and inspirations and, with the exception of this ship and a few others, all are from the imagination.
"They are usually built from sheets of cardboard and other found materials and are assigned various names and identities in line with the 'companies' they all belong to. Many contain commission and print art from other noted artists in rooms that are fully furnished, illuminated and decorated with all original concepts," he said.
Higner also said, some of the best of the collection and historic favorites will premier in September 2018 at the Castellani Art Gallery, at Niagara University.
Tribune Editor David Yarger contributed to this report.
Categories
Tribune Tribune feature Tribune HP Feature List