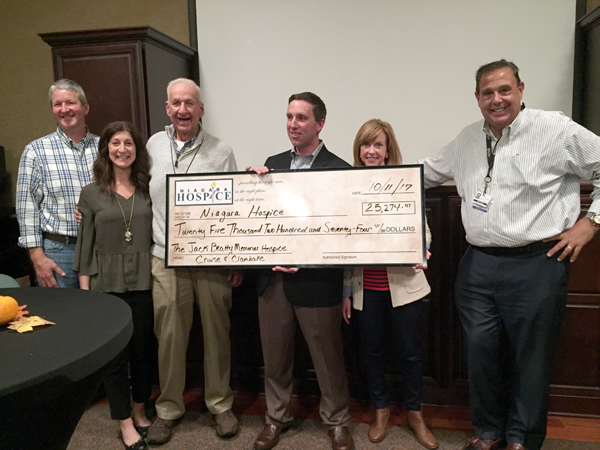 Thu, Oct 12th 2017 04:10 pm
Proceeds from The Jack Beatty Memorial Hospice Cruise & Clambake were presented to Niagara Hospice on Wednesday. The fundraising event, held Friday, July 10, and celebrating its 18th year, raised $25,274.14.
The Cruise & Clambake continued its tradition of entertainment, food and leisurely sailing and power-boating up the Niagara River, all to benefit Niagara Hospice. Once again, the Youngstown Yacht Club was the setting for the event, which featured local skippers and crews from various marinas on Lake Ontario donating their time and boats to take participants on a cruise up the Lower Niagara River.
The Junk Yard Dogs band played music on the water while on a pontoon boat. The three-hour cruise was followed by a huge cookout featuring a clambake and more live music by Soul Committee.
Proceeds from the cruise and clambake provide revenue for Niagara Hospice to use in its work with individuals and families dealing with end-of-life illnesses.
Next year's cruise and clambake will be held on Friday, July 13, at the Youngstown Yacht Club. Visit www.niagarahospiceregatta.com for registration and more information. To sponsor or donate items for the event, contact Maureen Rizzo at Niagara Hospice: 716-280-0728 or [email protected].
Since 1988, Niagara Hospice has provided end-of-life comfort, care and support to over 25,000 Niagara County individuals and families faced with terminal illness. For more information, visit www.NiagaraHospice.org or call 716-439-4417.
Categories
NFP Sentinel Sentinel feature Sentinel HP Feature Picture