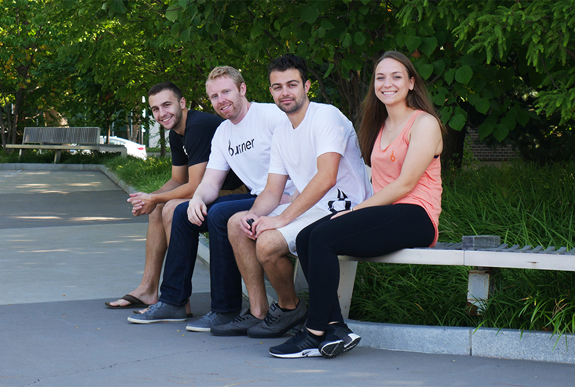 Wed, Sep 27th 2017 04:45 pm
A tech startup that features four Niagara University students and alumni among its employees will compete for $5 million in cash prizes during next week's 43North business plan competition.
The 16 finalist firms that will each give five-minute pitches to a qualifying round panel of judges on Oct. 5 includes Burner Fitness, an online fitness, nutrition and health training program marketplace designed and operated by a team with NU grads as executives. Ten of the companies will advance to the final round for a chance at a cut of $5 million in cash prizes, including the $1 million grand prize.
The CEO of Burner Fitness is Oke Okaro, a well-known and highly accomplished technologist who founded ESPN Mobile in 2004 and ESPN Interactive TV in 2005, and served as Bloomberg's head of mobile for five years.
Okaro connected with Leo Schultz, a Niagara alumnus, while Schultz was working as a contractor with Silicon Valley's tech giants. The pair co-founded Burner Fitness in the fall of 2015 before relocating most of the team from California to Buffalo that winter to stretch the early angel investment and "enjoy the better lifestyle that Western New York has to offer," Schultz said.
Burner Fitness is available on the web and as a mobile app. Personal trainers, nutritionists, doctors and/or any type of health or wellness experts can create, publish and sell programs in the marketplace. The programs are then accessible to users on the Burner Fitness application.
Burner Fitness also provides users with free tools to track diet and exercise, determine optimal caloric intake and nutrients for the users' goals, and gamify the experience to motivate users. Each program has a community of users competing for and sharing results.
"Our industry is full of enterprise software that is focused on serving the gym, coach or corporation," Schultz said. "Our priority has been on the end user experience. We want to be the Apple - not the Blackberry - of fitness applications."
Schultz is the company's chief technology officer and has linked the firm to the university through a business club he co-founded as a student at NU, B.O.L.D., which stands for "Business Organizational Leadership Development." The club is focused on bringing a sustainable organizational thinking of business to social impact.
Kevin Ryan, the club's other co-founder, also co-founded Burner Fitness and serves as the company's lead developer. A 2014 NU alumnus who played hockey as an undergraduate, Ryan manages front-end development for Burner's mobile and web applications.
B.O.L.D.'s officers for 2017 include senior marketing major Megan Rogers and junior accounting major Domenic Conroy. Rogers is already involved with Burner's production, marketing and operations, while Conroy has played a role in engineering features and product rollout. Both students plan to join Burner Fitness as full-time employees after graduating from NU.
In 2015, Burner Fitness created a "Silicon Buffalo" startup mentorship and workshop series at NU to expose students to the world of startups, digital media and programming. The program has been successful placing students into internships with startup companies thus far. Schultz said that future plans call for up to three student-led companies to be created out of the program annually, and then linked with the Burner team's venture capital connections.
Burner Fitness has also gotten involved with the Buffalo Niagara Medical Campus' health initiatives, piloting its technology partnerships with local corporate and population wellness programs.
"Our partnership with the Medical Campus is exciting," Schultz said. "They have a forward-thinking executive team. Our pilot has the potential for saving millions of dollars in health care costs, creating jobs in the wellness industry and new access to wellness coaching and preventative care for thousands of people across Western New York."
The finals of the 43North business plan competition take place at 6 p.m. Thursday, Oct. 5, at Shea's Performing Arts Center in Buffalo.
To learn more about Burner Fitness, visit www.burnerfitness.com.
Additional information on NU College of Business Administration can be found at www.niagara.edu/business.
Categories
Business Feature NFP