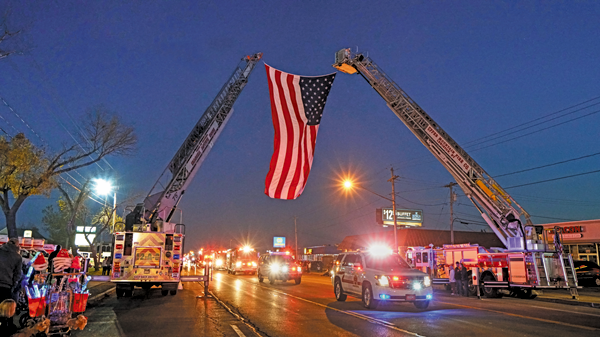 The American flag raised as the motorcade goes on during the 2016 Electric Lights Festival. (Photo by K&D Action Photo and Aerial Photography)

Fri, Sep 22nd 2017 01:55 pm
Participants still have time to register for Niagara Electric Lights Parade. The deadline for entries is Oct. 27. Applications are online at TNBPA.com, and in person at the Town of Niagara town clerk's office.
This year's 13th annual Electric Lights Parade in the Town of Niagara will begin at 6:30 p.m. Saturday, Nov. 4.
The parade route is Fourth Avenue to K-Mart on Military Road.
A major highlight of the Electric Lights Parade is the appearance of Santa Claus, who will be on hand to greet the crowd.
A food drive will also be part of this year's parade. Volunteers will gather nonperishable food donations from parade spectators for local soup kitchens. Parade organizers encourage donations of food to their church food pantries and let them know it is on behalf of the Niagara Electric Lights Parade.
The major sponsor for the parade is Republic Services (Allied Waste Industries of Niagara Falls). Allied Waste owns and operates the Niagara Falls Sanitary Landfill, located at the intersection of 56th Street and Niagara Falls Boulevard.
Last year's parade drew several thousand spectators, along with the hundreds who were part of the bands, floats and community groups which took part.
The parade is organized and presented by the Town of Niagara and the Town of Niagara Business and Professional Association Inc.
Categories
NFP Tribune Tribune feature Tribune HP Feature Picture