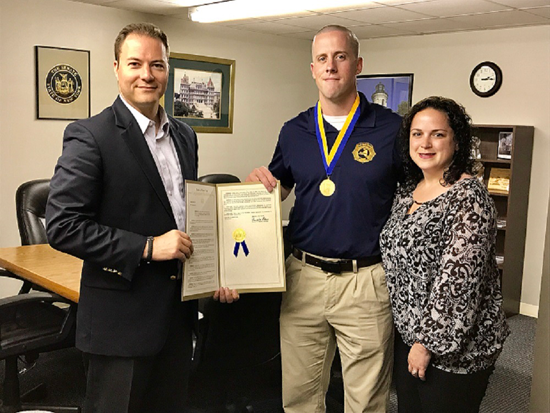 Mon, Jul 10th 2017 04:15 pm
Orleans County correction officer honored for thwarting kidnapping, saving 16-year-old girl
New York State Sen. Rob Ortt on Monday awarded the New York State Senate Liberty Medal to Orleans correction officer Tommy Brice. He potentially saved the life of a 16-year-old girl after preventing a kidnapping in 2016.
On May 16, Brice stopped at a gas station in Albion on his way home from work. While pumping gas, he noticed a young girl walking down the street with an older man following closely behind her. Brice said the girl looked uncomfortable and nervous as the man repeatedly approached her trying to talk to her.
Brice said he noticed the girl attempted to walk faster to try to get away from the suspicious man. At that point, he decided to intervene and immediately drove up to the girl to ask her if something was wrong. When she started crying, Brice instantly called the police. Brice then followed the man back to a local motel and waited for police to arrive. When the police entered the man's motel room, they found four knives lined up on the bed. The man told police he had intended to abduct the young girl.
Ortt said, "Correction officer Brice went above and beyond the badge. Like so many members of law enforcement, correction officer Brice's decisive action thwarted a kidnapping and dangerous, life-threatening situation. His instincts, training and quick thinking most likely saved that little girl's life and are worthy of this honor. I am proud to recognize him today for his bravery and heroic actions."
The New York State Senate Liberty Medal is the highest honor an individual can receive from the State Senate. Similar to the national Congressional Gold Medal, the award is bestowed upon individuals who have merited special commendation for exceptional, heroic or humanitarian acts and achievements on behalf of their fellow New Yorkers.
Last month, Brice earned the Medal of Merit from the New York State Department of Corrections and Community Supervision for his courageous actions.
Brice is a seven-year veteran of the Orleans Correctional Facility.
He is pictured wearing the State Senate Liberty Medal and holding a Senate Resolution. Pictured, from left, are Ortt, Brice, and his wife, Cassie.
Categories
Top Around WNY Feature
comments powered by Disqus