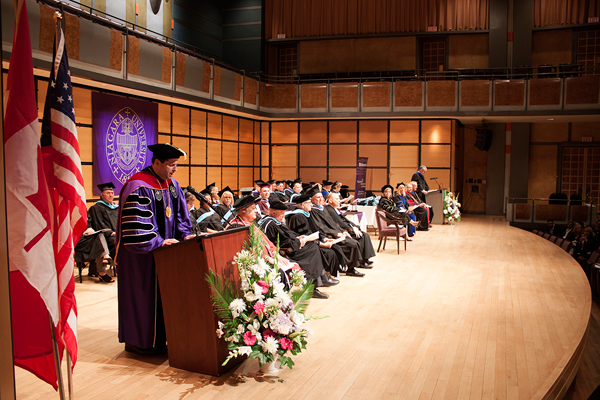 The Rev. James J. Maher, C.M., president of Niagara University, addresses the new teacher graduates during Tuesday night's commencement at the Toronto Centre for the Arts.

Wed, May 24th 2017 03:35 pm
Niagara University awarded degrees to 125 graduates during its 10th commencement in Ontario on Tuesday at the Toronto Centre for the Arts in North York.
Fittingly, Tom Donovan, who served as director of Niagara's campus in Ontario from 2006-16, delivered the commencement address and was awarded the university's Ozanam Medal.
During his remarks, Donovan referenced "The Wizard of Oz," telling the graduates, "Throughout your career, you'll encounter many students who, like the characters, are searching for answers and searching for self-realization - looking to become 'the best they can be.' You'll encounter parents who all have aspirations for their children, and they all will look to you to be the person who opens their minds, their hearts and gives them the courage to pursue their goals."
Donovan is credited with developing the conceptual framework for Niagara's bachelor of professional studies program in education, which earned ministerial consent from the Ontario Ministry of Training, Colleges and Universities, and accreditation from the Ontario College of Teachers. Thanks in large part to his collaborative stewardship, the BPS program has experienced remarkable growth over the past decade, with more than 1,500 successful educators among its alumni.
The Rev. James J. Maher, C.M., president of Niagara University, conferred the degrees of bachelor of professional studies in education and master of educational leadership on the graduates.
Two students who achieved the highest grade-point average in their respective fields of study received gold medals: Rebecca Annible for the primary-junior program, and Laura Cerullo for the intermediate-senior program. In addition, Lisa Perrenoud (primary-junior) and Sabrina Monteiro (intermediate-senior) were honored with Excellence in Teacher Preparation awards, as determined by faculty members.
Niagara also presented its Legacy of Service Award to Dr. Frank F. Calzi, a 30-plus-year faculty member and administrator in Niagara University's College of Education. Selected as one of the top 100 school administrators in the U.S. by the Executive Educator Journal and American School Board Journal, he is credited with shaping the college's footprint in Ontario since it began offering teacher education programs in 1984. In 1999, the Niagara Falls City School District honored Calzi with its highest accolade, The Golden Apple Award.
Dr. Robert T. Dixon, author of "Catholic Education and Politics in Ontario," which is now required reading for Catholic school board managers across the province, was presented with the Founder's Award. A longtime teacher and administrator in boards of education throughout Ontario, he served as an adjunct professor at Niagara University from 1974-91. Dixon was honored with the Brant Haldimand Norfolk Catholic District School Board's first Outstanding Contribution to Catholic Education Award in 2016.
Niagara University, a Catholic and Vincentian institution in Lewiston, offers a bachelor's degree in teacher education, with programs in primary-junior and intermediate-senior teacher preparation, at sites in Toronto and York. The university, founded in 1856, has written consent from the Ontario Ministry of Training, Colleges and Universities to offer its programs, which are accredited by the Ontario College of Teachers. It has offered education programs in Ontario for more than 30 years.
Further information on NU and its program in Ontario is available at www.niagara.edu/ontario.
Categories
School