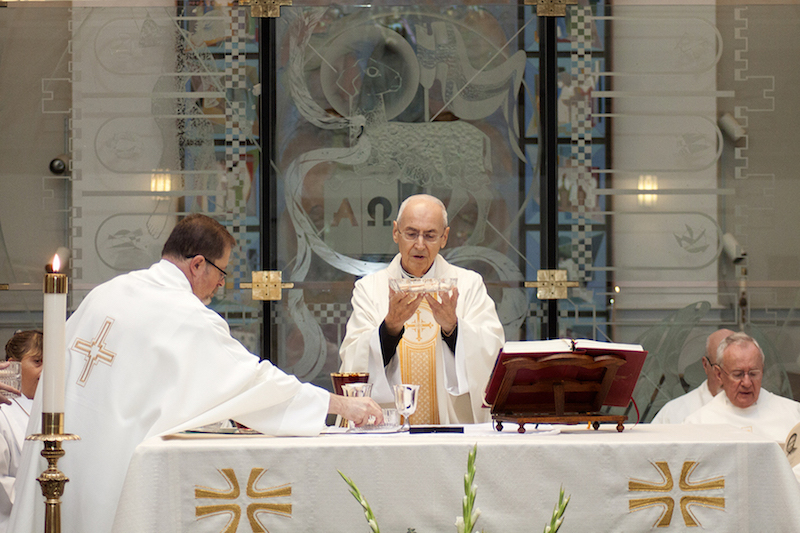 Wed, May 17th 2017 09:15 am
The Niagara University community celebrated the golden jubilee of the priesthood of the Rev. Joseph L. Levesque, C.M., president emeritus, during a special Mass on May 6 in the Alumni Chapel.
There were 24 concelebrating priests for the Mass, 15 of whom were Vincentians, including Levesque and the Rev. James J. Maher, C.M., president of Niagara University. They were joined by the Most Rev. Edward M. Grosz, auxiliary bishop of Buffalo.
Mass was followed by a celebratory dinner for Levesque at the Niagara Falls Country Club.
A native of North Tarrytown, Levesque was ordained as a Vincentian priest on May 27, 1967, at Mary Immaculate Seminary in Northampton, Pennsylvania. He taught religious studies at St. John's Preparatory School in Brooklyn and at St. Joseph's Seminary in Princeton, New Jersey, before being assigned to Niagara's religious studies department in 1970. Levesque left his teaching duties at Niagara University to pursue his studies in theology at The Catholic University of America, where he received his doctoral degree.
In 1978, Levesque resumed teaching at Niagara, and was also named dean of the College of Arts and Sciences and director of the college's graduate division. He remained in the post until 1986, when he returned to seminary work, serving as president of St. Joseph's Seminary.
Levesque was elected provincial superior of the Eastern Province of the Congregation of the Mission in 1990. He stepped down from the position in June of 1999 after the maximum nine-year term, and, in 2000, he was named the 25th president of Niagara University.
During his tenure as president, the fourth-longest in the history of Niagara, NU experienced a continuous process of transformation that significantly developed the physical character of the university's campus and its 21st century approach to teaching and learning.
Nearly $100 million was invested in new construction, renovation and improvement projects, including the Academic Complex and Bisgrove Hall, the B. Thomas Golisano Center for Integrated Sciences, the Leary Theatre and the Elizabeth Ann Clune Center for Theatre, and the Gacioch Family Alumni and Admissions Center.
In September 2011, reinforcing Levesque's vision for community service, NU launched the Institute for Civic Engagement. An initiative developed through the president's office, the institute was designed to strengthen existing community partnerships and form new town-gown relationships.
When Levesque announced in January 2013 that he would be stepping aside as president of Niagara University, the institution's board of trustees granted him the esteemed title of president emeritus. Four months later, it was announced NU's Institute for Civic Engagement would be renamed the Rev. Joseph L. Levesque, C.M. Institute for Civic Engagement to honor his commitment to the community.
In November 2013, it was announced that the Rev. Joseph L. Levesque, C.M., Endowed Scholarship had been established as a tribute to Levesque's lasting, positive impact on the university. The scholarship is available to first-year NU students who live in a rural community from one of the eight counties that comprise the Western New York region.
To learn more about Niagara University, visit www.niagara.edu.
Categories
Around WNY NFP School feature Top Around WNY Feature