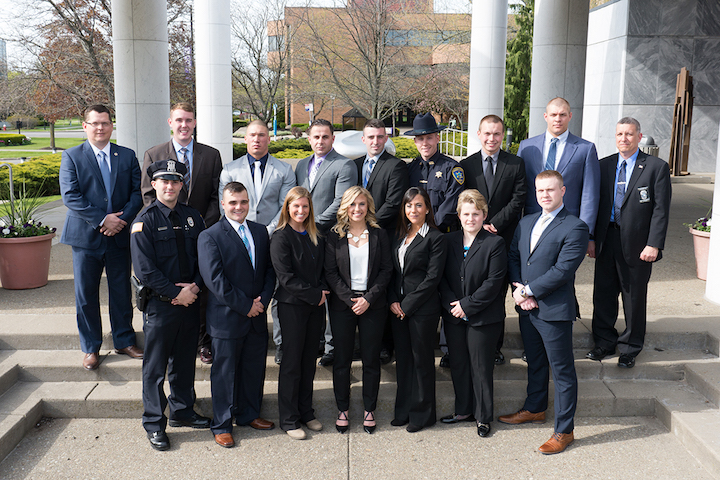 Thu, May 11th 2017 11:20 am
The Niagara County Law Enforcement Academy graduated its 64th class during a ceremony held Wednesday at Niagara University's Castellani Art Museum.
FBI Special Agent Jonathan Lacey was the ceremony's keynote speaker. Lacey, as the crisis manager and training coordinator for the FBI's Buffalo division, is responsible for ensuring the FBI is always ready to respond to crisis situations in the Buffalo division's 17-county territory. The Williamsville native graduated from the U.S. Military Academy at West Point.
Lacey said that, as he drove to Niagara, he was filled with a sense of optimism for the future. He would go on to use the term "promise" to describe what he saw in the 14 men and women seated to his right.
"Today is a day for optimism, because you are well prepared for whatever challenges lie ahead," Lacey said. "Hold on to that knowledge, but with humility. It is a day for optimism, because what you have chosen to do - help others - is intrinsically good. Do it with compassion and courage. I know you will."
Following Lacey's remarks, NCLEA co-directors Lt. Aaron Shultz and Det. John Faso presented diplomas to this spring's graduates:
Marissa Bonito, the academy class president, said the graduates should maintain the mindset that has been instilled in them over the past few months: They will put themselves in harm's way for nothing more than the gratification of serving others.
"We are the men and women who put focus on serving community, rather than self," Bonito said. "If there was one thing we learned, it is that teamwork can get us through anything. United, we can take on the world."
Award recipients:
Niagara University is the only four-year, private college in New York to host a full-time police academy.
Coordination of the program on Niagara's campus is undertaken by the university's office of continuing education and criminal justice department.
For more information about the Niagara County Law Enforcement Academy, call 716-286-8759 or email [email protected].
Categories
NFP School feature