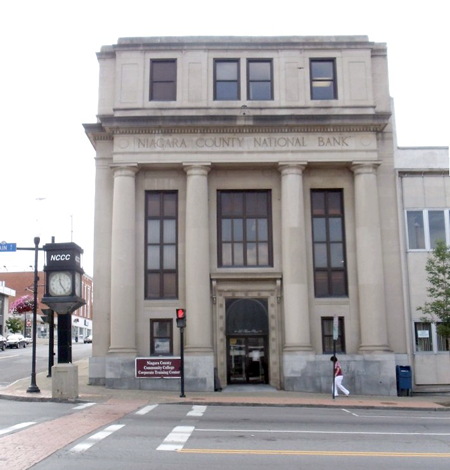 Niagara County lawmakers overwhelmingly backed a resolution Tuesday that will transfer a surplus building in Lockport's downtown to the city in a move intended to help city planners bring a professional office building online in the heart of the business district.

The building (pictured), located at 50 Main St., is a prime office building the county acquired in April 2015 as part of a package deal to buy two other office buildings being rented entirely by county agencies. As the three buildings were bundled at auction, county officials were forced to acquire the vacant building at 50 Main St. The acquisition of the buildings reduced rental costs to taxpayers by more than $900,000 annually.

Since then, county officials have pondered the best disposition of the site, which formerly housed the Niagara County Community College Small Business Development Center. Legislature Chairman Wm. Keith McNall, R-Lockport, suggested, as long ago as August 2015, various solutions to return the building to productive use in downtown.

Tuesday night's vote is an important step in making that a reality, as it authorized transfer of the property to the Greater Lockport Development Corp. for $1, and that agency will work to secure a tenant. This follows a March 23 resolution passed by the GLDC authorizing the city to take the property.

"We understand the vitality of this building to Lockport's business corridor and the value of bringing additional office professionals to downtown Lockport, which should help the entire business district through increased foot traffic and receipts," McNall said Wednesday morning. "We also, though, want to defer to the professionals at the GLDC on how to best secure a tenant or tenants that can enhance our downtown and help our downtown businesses succeed."

McNall noted the building holds significant historic value in Lockport's downtown. The Main Street site was occupied by the Niagara County Bank, a precursor to Marine Midland, that was established as the Canal Bank in 1839. The modern building was constructed in 1918 at the height of World War I.

"According to materials provided to us by Deputy County Historian Craig Bacon, a former bank president said of the site a half century ago, 'This bank has grown and prospered with Lockport.' We see that as a legacy worth continuing," McNall said. "The City of Lockport and the GLDC have been great partners in our efforts to preserve this important piece of Lockport's history."

Legislator Tony Nemi, R-Lockport, has worked closely with McNall to make the building transfer a reality after city officials approached him about options for developing the site and returning it to productive use.

"We are working to help downtown and, from our conversations with the GLDC, are confident they will secure a tenant that will enhance our downtown both by increasing foot traffic and giving 50 Main St. - the building itself - the kind of attention it deserves, given its central location," Nemi said. "The aesthetics of our downtown have increasingly taken center stage in development efforts since the 1990s, and 50 Main St. is an attractive building that should remain so. The right use and the right tenant are critical to that."

County attorneys are in the process of formally transferring the building.