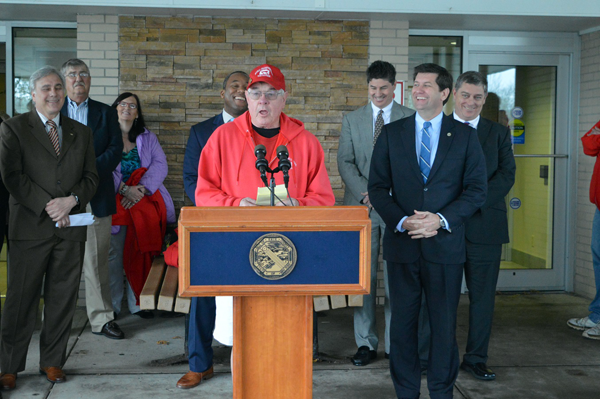 The crowd reacts to a joke told by Robert Miller (at podium), a volunteer driver for the Rural Transit Service, during a press conference held Wednesday at the Town of Clarence Senior Center. The Rural Transit Service, which celebrated its 25th anniversary in 2015, is funded through federally provided Community Development Block Grants, but is in danger of losing its funding if the proposed federal budget for 2018, which eliminates all CDBG funding, is passed. In addition to Erie County personnel from the departments of Senior Services and Environment and Planning, Miller is joined by Erie County Executive Mark C. Poloncarz (right) and Town of Clarence Supervisor Patrick Casilio (left).

Erie County Executive Mark C. Poloncarz was joined Wednesday by partners in government from many levels and numerous localities as he traveled across Erie County as part of National Community Development Week, both recognizing the wide variety of projects made possible by Community Development Block Grant funds and also celebrating the community-enhancing effects these projects have.

CDBG funding is facing potential complete elimination in the recent proposed fiscal year 2018 federal budget, which would halt millions of dollars of infrastructure improvements that benefit the 34 consortium municipalities across the county. Poloncarz was joined by Congressman Brian Higgins (NY-26) and City of Lackawanna Mayor Geoffrey Szymanski in a morning visit to Dona Street in Lackawanna, where the former Lincoln School is slated for 2017 demolition, thanks in part to $300,000 in supporting CDBG funding.

"Here in Lackawanna and all across Erie County, CDBG funds are used to build stronger communities and a better quality of life for all. CDBG projects help municipalities to reinvigorate their community centers and business districts, eliminate blighted buildings and improve infrastructure," Poloncarz said. "This funding leverages funding supplied from each consortium community and assists them in completing projects that are important and specific to them and their residents, and it has been incredibly effective in energizing community development in Erie County."

The deteriorated building, at 100 Dona St., Lackawanna has been vacant for over 10 years and has been condemned. Future plans for the site after asbestos abatement and demolition include affordable housing with the construction of 25-30 single-family homes for low-income tenants/owners.

In a later visit to the Town of Clarence Senior Center, Poloncarz was joined by Clarence Supervisor Pat Casilio, other elected officials, and concerned seniors to review CDBG-funded improvements to the center and also discuss the importance of the Rural Transit Service, a CDBG-funded transportation service that links seniors in outlying areas of the county to the programs and services they need. At the center, improvements included new entrance doors and a new push button automatic entry along with the reconstruction of the vestibule area, which made the entranceway fully ADA compliant. In 2015, the Rural Transit Service celebrated its 25th year of service in Erie County. During that time, RTS has helped over 5,000 individuals needing transportation with approximately 250,000 trips. In 2016 alone, the service provided 10,347 trips, and was funded solely through $267, 421 in CDBG funding.

Poloncarz added, "CDBG funding makes it possible to provide fully accessible public facilities for seniors and also provide the means to get them around the county for appointments and to meet the other needs of their lives. These are just two ways that these funds have a direct positive impact by keeping people connected and improving their quality of life. I am urging all residents to contact their congressional representative to voice their support for this vital funding."

Since 1985, National Community Development Week has been held during March or April each year and has been an opportunity for CDBG grantee communities to showcase various successful projects that were funded with CDBG dollars. The CDBG program provides grants to over 1,200 state and local governments and funds activities such as housing rehabilitation, business assistance, senior services and infrastructure - to name a few. These activities are primarily targeted to low-income and moderate-income persons and households. Every $1 of CDBG leverages another $3.65 in other funding; bringing additional resources to communities that support jobs, businesses and, most importantly, the people who live there.

The CDBG coalition is a network of 22 national organizations dedicated to the support and funding of the CDBG program. CDBG was enacted in 1974 under the Housing and Community Development Act. Poloncarz's camp said it remains one of the most important resources for state and local governments and their partners to use in devising flexible solutions to meet community development needs.