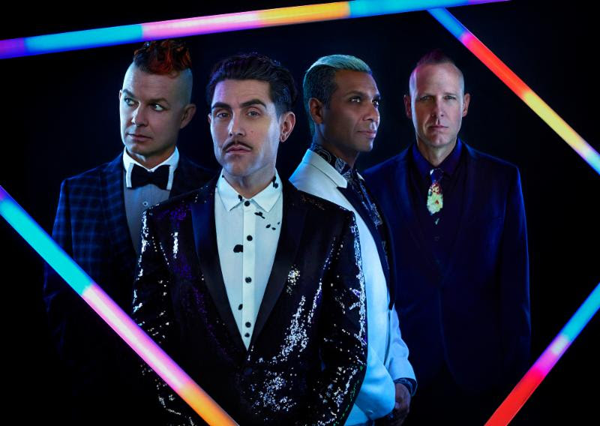 DREAMCAR today released "Born To Lie", the expansive second track off their self-titled debut album, due out May 12 via Columbia Records. Watch the song's lyric video HERE.

Starting today, "DREAMCAR" is available for pre-order HERE. Fans who pre-order the album will receive instant downloads of "Born To Die" and debut single "Kill For Candy."

Later this month, DREAMCAR will make their network television debut performing "Kill For Candy" on ABC's "Jimmy Kimmel Live," on at 11:35 p.m. ET on Tuesday, April 18. The band will also perform on "The Late Late Show with James Corden" during the album's release week. Tune in to CBS on May 11 at 12:37 a.m. to catch the appearance.

DREAMCAR's sold out West Coast tour around their appearances at the 2017 Coachella Valley Music and Arts Festival kicked off this week with back-to-back nights at The Constellation Room in Santa Ana, California. Next month, the band will embark on a tour of the East Coast and Midwest. Click HERE for a complete list of upcoming live dates and ticket information.

DREAMCAR performs in Toronto on Thursday, May 25, at the Phoenix Concert Theatre.

There's something romantic about a band's early days. In the summer of 2014, No Doubt's Kanal (bass), Dumont (guitar) and Young (drums) and singer Havok began writing and demoing music together. Without telling a soul outside of their significant others, the four musicians clandestinely moved into a cramped downtown Los Angeles rehearsal spot and revved up what would become DREAMCAR.

The union of Kanal, Dumont, Young and Havok pre-dates those magical jam sessions. Paths crossed in the music industry as they do, but Young can recall standing on the side of the stage and watching Havok with rapt attention as Blaqk Audio supported No Doubt in 2012. The seeds became planted then.

Rife with shimmering guitar tones, funky slap bass, bombastic drums and a neon-lit dance floor dreaminess, DREAMCAR gleefully nods to the decade of Boy George and "Back to the Future" through a kaleidoscope of wisdom earned from three decades creating and connecting with fans worldwide.