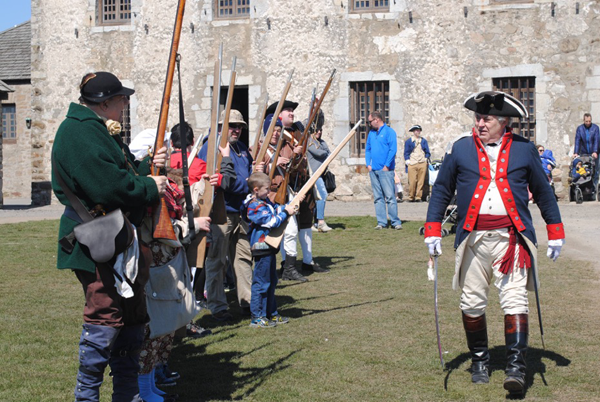 Thomas Thompson, right, of Hoisington's New York Rangers, portrays an officer of the Continental Army and urges visitors to rebel from British control and fight as patriots. (Photo by Charlotte Clark)

Patriots Day Weekend launches Old Fort Niagara's re-enactment season with a salute to veterans and patriotism on April 22-23. The weekend's family-friendly, educational and interactive activities will enlighten visitors about the battles of Lexington and Concord that began April 19, 1775, and started the American Revolution.

The programs are suitable for all ages and everything is included with regular admission to the fort.

Patriots Day Weekend will also honor all U.S. military service members, who will be admitted free with proper ID. A ceremony at 2 p.m. Saturday will award special plaques to:

Volunteer re-enactors from Hoisington's New York Rangers sponsor this annual event with the help of Brant's Volunteers, 64th Regiment of Foot, and Fort McIntosh Garrison, which are also volunteer re-enactment units. They will portray Colonial Rebels, Colonial Loyalist and British Redcoats, and present musket-firing and clothing demonstrations, 18th century military drills and be available to meet with visitors and answer questions. Visitors will also be able to "enlist" as a rebel or loyalist and participate in mock battles using wooden muskets.

10 a.m. Assemble - Re-enactors will gather on the parade grounds

11 a.m. Recruiting demonstration - Children and adults can "enlist" as rebels or loyalists

Additionally, guided tours of Old Fort Niagara will be available both days.

The cost to attend these events is regular admission to the fort ($12/adult, $8/child ages 6-12, free/children 5 and under) and is free to members of Old Fort Niagara.

Old Fort Niagara's next re-enactment will be "Soldiers through the Ages," May 27-28, which will present a military timeline of soldiers at the fort over three centuries.