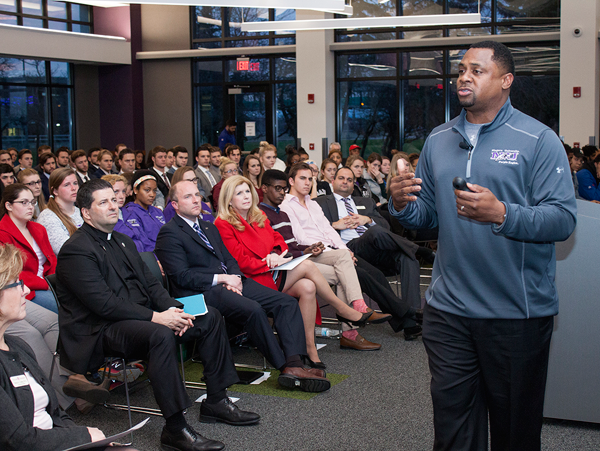 Early on in his presentation Tuesday night at Niagara University, NFL Executive Vice President of Football Operations Troy Vincent asked attendees to put their phones away. His intention was to create a safe space for dialogue to take place on a topic that he's dedicated much of his adult life advocating for: ending domestic violence.

Truth be told, the physical punishment that Vincent endured during a standout 15-year NFL playing career is miniscule when compared to the emotional toll he has experienced off the field.

Vincent, during his 90-minute presentation, recounted how, at age 8, he would hide in a closet with his younger brother while his mother was being beaten by a boyfriend. His memories of those instances of domestic violence remain crystal clear, as did his message for the more than 220 students and community members packed into the Clet Hall Dining Commons: There is no such thing as an innocent bystander.

The problem, Vincent said, is that people don't know how to find their voice when confronted with an opportunity to prevent or report a domestic violence incident.

"It starts with education," he said. "There's power in students coming together on issues like domestic violence."

With emotion in his voice, Vincent called domestic violence a "man's issue," citing data that illustrates that most perpetrators of that type of aggressive behavior are men. Vincent also noted that men are twice as likely to abuse women if they have previously witnessed domestic violence.

"In my 20-plus years of doing this type of work, the room is always full of women," said Vincent, a deeply religious man who is highly respected by business, sports, political and community leaders. "Tonight, right here at Niagara University, may be the most men I've ever seen in a room when I've spoken on this topic."

Vincent's address, titled "Leadership Over Violence: Why Character and Values Matter More Than Ever," explained how his involvement in sports helped him turn his pain into progress and inspired his lifelong commitment to end domestic violence and promote honesty, responsibility and leadership.

"This is my purpose now; it's what gets me up in the morning," Vincent said.

Niagara University organized Tuesday's event in accordance with its Catholic and Vincentian mission of helping those in need. During his opening remarks, the Rev. James J. Maher, C.M., NU's president, referenced one of St. Vincent de Paul's most well-known mottos, Totum Opus Nostrum in Opeeratine Consistit (Action is our entire task), and encouraged the attendees to be people of action.

"We need to take a stand, to eschew the path that leads to mediocrity for the one that directs us toward service," Maher said.

Vincent began his NFL career in 1992 as a first round draft pick of the Miami Dolphins. He made five Pro Bowls and three All-Pro teams during his NFL career, which included tenures in Miami, Philadelphia, Buffalo and Washington.

In recognition of his on-field achievements, Vincent was nominated for induction into the Pro Football Hall of Fame in his first year of eligibility and again in 2014, 2015 and 2016. He was previously inducted into the Philadelphia Eagles Hall of Fame and was elected into the Hall of Fame for the state of Pennsylvania, the University of Wisconsin and Pennsbury High, his high school alma mater. In 2017, the former Wisconsin Badger received the NCAA Silver Anniversary Award for collegiate and professional achievements.

Both during and after his playing career, Vincent has been a promoter of the character and leadership values that football contributes to society. He is the only player in history to have received the NFL Walter Payton Man of the Year award, NFL Players Association Byron Whizzer White Award, Sporting News No. 1 Good Guy, and NFL Athletes in Action Bart Starr Award. In addition, Sporting News named him one of the "35 or Younger Most Powerful People in Sports" and Ebony Magazine recognized him as one of the "50 Most Influential People in Sports."

Vincent served as president of the NFL Players Association from 2004-08. He joined the NFL office in 2010 to lead the league's player engagement department, which provides support programs for players and their families. He was named executive vice president of football operations in March 2014.

In 2016, Vincent received the Call to Men Award for Institutional Change for his efforts to raise awareness and prevent violence against girls and women. In 2015, he received the Humanitarian Award: Voice Over Violence, for his work to build healthy relationships and communities free from sexual, domestic and interpersonal violence.

"Troy Vincent is a nationally recognized voice for those who have no voice. He is widely considered to be an agent of social change, a man who is deeply committed to giving back and exemplifies a true passion for leading others to personal success," said Maher. "We are grateful that our students heard his call for social change and had an opportunity to learn from someone with Mr. Vincent's outstanding record of achievements in business, sports and community service."