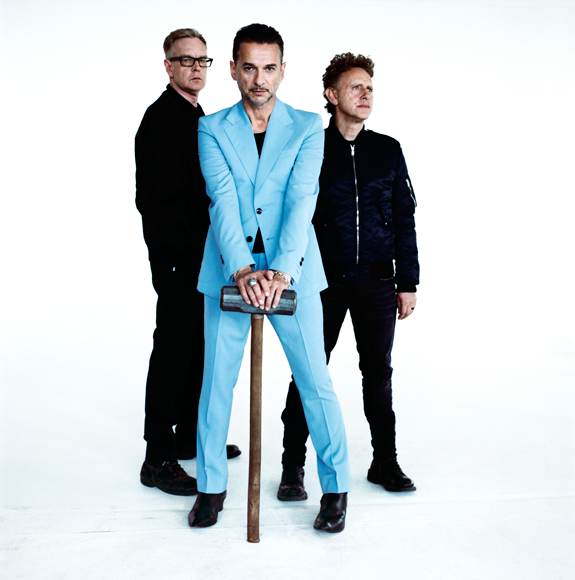 Depeche Mode's 'Spirit' debuts at No. 1 in multiple countries

"Spirit," the 14th studio album from iconic, multiplatinum-selling musical pioneers Depeche Mode, debuted at No. 1 in multiple countries, including Germany, France, Italy, Poland, Belgium, Switzerland, Austria, Portugal and Denmark. Proving to be not only a fan but critic favorite, "Spirit" has debuted in the Top 10 in 15 countries, including coming in at No. 5 in the U.S. and the U.K.

Entertainment Weekly raved, "an impressive new album that strikes a timely note," while Under the Radar noted, "the perennial group has hit yet another career peak."

The album, available both digitally and physically, was released globally via Columbia Records on March 17. "Spirit" is available as a standard 12-track album. The band has also released a two-CD deluxe version of the album, featuring a 28-page booklet of exclusive artwork and photos, along with five remixes created by Depeche Mode, Matrixxman and Kurt Uenala, collectively titled the "Jungle Spirit Mixes."

The vinyl version of "Spirit" was released on two 180-gram LPs, featuring the standard album and a special "Spirit" etching on the fourth side. Fans can purchase "Spirit" from online retailers here: smarturl.it/Spirit.

Depeche Mode celebrated release day with an intimate live show for Telekom Street Gigs in the legendary Funkhaus Berlin. Fans across the globe joined the event via HD live stream. The entire launch event was streamed on Depeche Mode's Facebook and Twitter (a worldwide-trending and world-first global Twitter concert live stream), as well as on Telekom Street Gigs' website in both 360-degree and 4K formats.

Prior to the release day event, Depeche Mode also performed on "The Tonight Show Starring Jimmy Fallon" and sat down with The New York Times chief music critic Jon Pareles for a "Times Talk" in front of a sold-out audience at the NYU Skirball Center. View the conversation online here: http://www.timestalks.com/detail-event.php?event=depeche_mode.

Depeche Mode will support the release of the LP with an extensive global tour, giving fans around the world a chance to experience the band's stunning live shows. The "Global Spirit Tour" will see the band play to over 3 million fans in Europe, North America and South America. The tour kicks off May 5 in Stockholm, Sweden, stopping at stadiums across Europe before continuing on to North America in late August. Tickets for the European and North American legs are on sale now. The tour will then continue to Latin America in March 2018, with stadium shows just announced in six countries. Tickets for the Latin American tour are on sale soon. For more details and to sign up to receive announcements about upcoming tour dates, visit www.depechemode.com.

One of the most influential, beloved and best-selling musical acts of all time, Depeche Mode have sold over 100 million records and played live to more than 30 million fans worldwide. Formed in 1981, Depeche Mode - Martin Gore, Dave Gahan and Andy Fletcher - continue to win critical and commercial acclaim around the world both in the studio and on the road, with innumerable artists citing them as inspirations and innovators. The band's 14 studio albums have reached the Top 10 in over 20 countries, including the U.S. and U.K. "Spirit" and the "Global Spirit Tour" are poised to continue the band's history of musical innovation and the band's critical and commercial success.