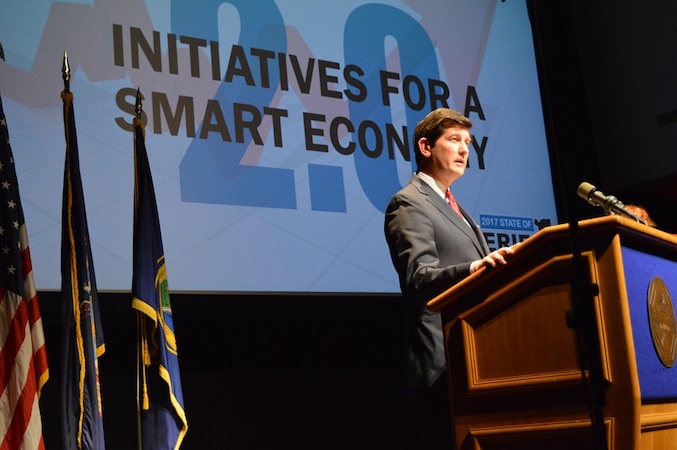 Erie County Executive Mark C. Poloncarz was joined by elected officials, business and community leaders, members of the cultural and not-for-profit communities, and concerned citizens as he delivered his 2017 State of the County address on Wednesday at the Burchfield Penney Art Center on Elmwood Avenue in Buffalo.

The address, the fifth State of the County Poloncarz has delivered, provided progress reports on a number of initiatives advanced by the Poloncarz administration over the past year, and also presented an ambitious action plan for strengthening Erie County's workforce, revitalizing villages and smaller communities across the county, and promoting affordable housing.

Among other highlights, the 45-minute address also included a call for county legislators to act on a number of issues that have languished in committee, such as a county fair housing law and an ethics law, as well as outlining new protections proposed recently by Poloncarz to better protect seniors in nursing homes. However, the positive economic news and pragmatic plans for future improvements were tempered by sobering and realistic acknowledgements of the uncertain budget atmosphere in the nation's capital, which could imperil much of the progress made in Erie County.

"The state of Erie County is strong, with positive economic development at the Bethlehem Steel site and investments in Erie Community College leading the way," Poloncarz said. "Over the past four years, more than $225 million has been invested in our roads and bridges, while at the same time we have reduced the county's long-term debt by nearly $84 million and have seen our bond ratings rise as a result of our sound fiscal stewardship.

"We are a compassionate community that cares and are leading the way in the fight against opioid abuse and the problem of lead in our communities, and are making new inroads as we address poverty in a community-wide way. Today, we are seeing the power of partnerships and what can happen when committed people and agencies share a common vision that benefits the larger community. However, it is important to note that Erie County's progress in protecting our precious water resources, reinvigorating our community hubs, and providing vital services that residents depend on could be swept away by vicarious and myopic budget priorities emanating from Washington."

The full text of the speech can be read HERE.