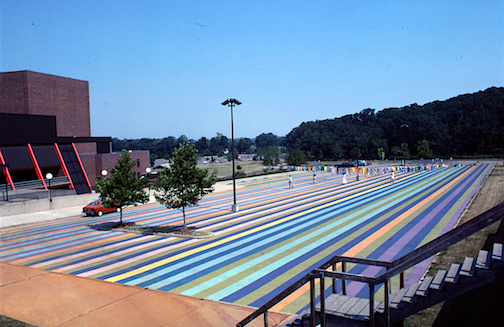 Color image from the Artpark Archival Collection at the Burchfield Penney Art Center.

In the summer of 1979, artist Gene Davis (whose estate is held by the Smithsonian American Art Museum) installed artwork at Artpark titled "Niagara '79." The artwork came to be known as "The Painted Parking Lot," and guests said it was "incredible."

Davis spent weeks hand-rolling 60, 2-foot-wide-by-364-foot-long lines in nine different colors. This artwork was widely covered by the media. Many in the community came out to experience "The Painted Parking Lot." At more than 43,000 square feet, The Guinness Book of World Records hailed it as the largest painting in the world at the time.

With permission from the Smithsonian American Art Museum, Artpark & Company is launching a campaign to re-install "Niagara '79 (The Painted Parking Lot), by Gene Davis," for the 2017 season.

To do so, Artpark & Company must raise $20,000 on Kickstarter.com by April 9, or this project cannot happen.

Kickstarter.com is a crowd-funding site that allows patrons to donate to a project online using a credit card or PayPal account.  Kickstarter.com is "all or nothing," so if a project does not reach its goal by the end date, all of the money goes back to the people who have pledged to donate.

At different levels of donation, "backers" are able to claim rewards based on the amount pledged.

Tanis Winslow, director of visual arts and family programming at Artpark, said, "This artwork is a legendary example of Americana by one of the most influential color field painters of his time. To see it reinstalled here at Artpark would be a testament to our community and our continued history as a laboratory for artistic growth, expression and influence. The arts are an incredible and necessary part of the human experience."

Artpark & Company welcomes the community to a gathering at the Orange Cat Coffee Co. at 5:30 p.m. Thursday, March 30. Guests are encouraged to bring along pictures they might have of Artpark or "Niagara '79." Share refreshments and stories as project is discussed. A brief Q&A will follow.

To donate by check, make checks payable to "Artpark and Company" and note "painted lot" in the memo space on the check. Mail to: Attn: Tanis, Artpark, 450 S. Fourth St., Lewiston, NY 14092.

Check donations must be received by April 4. A gift will then be added to the Kickstarter under the donor's name, by Tanis, and one can claim the reward.

https://www.kickstarter.com/projects/1225791209/niagara-1979-by-gene-davis-back-at-artpark-recreat or go to Kickstarter.com and search "Gene Davis Artpark."