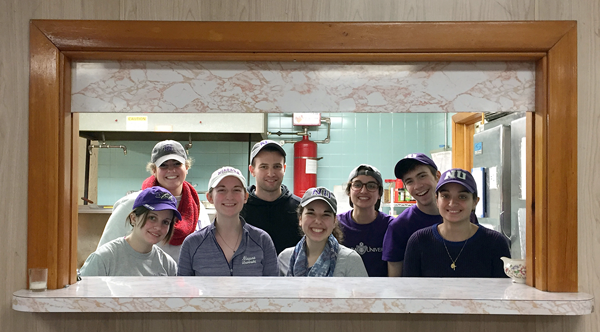 Vincentian seminarian Thomas King, pictured here in a black sweatshirt with students at the St. Vincent de Paul soup kitchen in Niagara Falls, became a very active member of the campus community during his apostolic month at Niagara University.

As an undergraduate student at St. John's University, Thomas King became acquainted with the Vincentian community. The Oakdale native was studying toward a degree in adolescent education (with a concentration in biology) - all while growing active in campus ministry and taking on a minor in theology.

King graduated in 2012 and, like many aspiring teachers, dove right back into academics to earn his master's degree. Once again, he was stationed at St. John's, where the draw to the mission of St. Vincent de Paul continued to appeal to his spirituality.

As a grad student, King ramped up his involvement with campus ministry, leading service trips to Germantown, the U.S. headquarters of the Vincentians, and Lourdes, France. Most of his outreach, however, occurred in the poor sections of Manhattan and the local housing projects near the St. John's campus in Queens.

"All of these experiences had been putting me in situations that I never really envisioned myself in," King said.

It was a busy time for King, between attending classes, participating in student-teaching field experiences and ministering to individuals struggling on the margins of society.

In what seemed like a flash, King finished his graduate studies and was hired to teach biology and physics at Monsignor Scanlan High School in the Bronx. He was living the so-called American dream. But King came to find out it was no longer his.

"During my time teaching, I was thinking about different things for my life, and I felt like something was missing," King explained. "A big part of it was this contact I had made with the Vincentians, and also keeping up with my faith and service life."

So, in February of his first year as a full-time teacher, he applied to the seminary.

Once King was admitted, he was required to return to school - once again, he chose St. John's - to complete a degree in philosophy, a standard requirement for seminarians. He then moved on to the internal seminary, more commonly known as the novitiate, in Germantown to deepen his spirituality.

This phase saw King participating in regimented prayer within the community of fellow seminarians and priests, which allowed him to develop a better understanding of community living and take ownership of his apostolic life.

Elsewhere, King spent mornings at the St. Vincent de Paul Parish in Germantown, ministering to the elderly. His afternoons were largely comprised of Communion rounds to the sick and homebound. Given his background, King also assisted with a tutoring program, In Dwelling, which helped teenagers complete their work after school and prepare college applications.

This Jan. 20, King arrived at Niagara University to commence his month of apostolic mission, which is equated to an internship experience for a seminarian. He lived in residence with Niagara's Vincentian community and performed service on campus and at several community locations, most notably Mount St. Mary's Hospital Neighborhood Health Center and the Heart, Love & Soul food pantry and soup kitchen.

King, only 26 years old, emits a calm and disarming demeanor that belies his age. While he's smart and affable, he's apt to let others speak first, illustrating the trademark Vincentian humility to listen and accompany.

"Vincentians do that all the time. They show God's love by being attentive and present," King reasoned.

While he only spent 36 days at NU, King said the spirituality and closeness of the university community was very apparent.

"Niagara University is a very lively place in terms of spirituality," King stated. "It's close-knit and not as overwhelming as St. John's. The campus has a very peaceful element and there's a real sense of community. I was so impressed with the generosity and willingness of students and employees to meet and be with other people; it's such an inviting culture.

"At Niagara, there are so many positive things that people are working on. There's such a drive to make the community better."