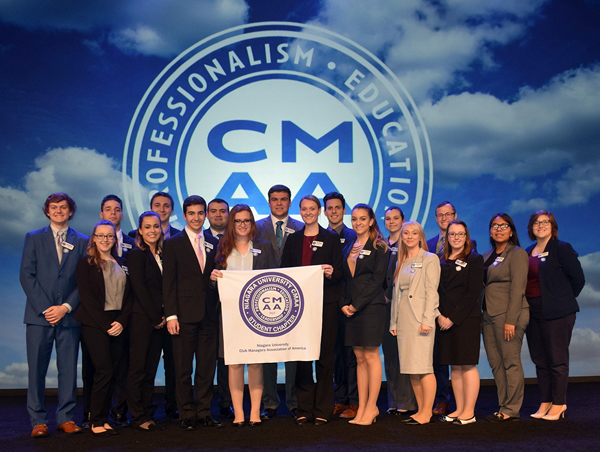 For an eighth straight year, the Club Managers Association of America's  Student Chapter of the Year resides on Monteagle Ridge.

Niagara University's CMAA student chapter topped 46 other colleges and universities from across the country to receive the prestigious annual award during the association's 90th World Conference on Club Management and Club Business Expo, which was held Feb. 7-11 in Orlando.

The Student Chapter of the Year Award is based on a series of factors, including the number and variety of educational programs offered, member employment and internships in clubs, membership growth, the club's relationship with the state chapter of CMAA, and member attendance at events. The Niagara University student chapter has won the award every year since 2008.

Students who join Niagara's CMAA student chapter are required to complete a rigorous schedule of educational and networking events, and work at a club each summer between academic semesters.

In addition to receiving Student Chapter of the Year honors, the Niagara contingent was also recognized for a first-place award in the social media category of the "Club of the Future" competition. This award program is a way for students to express their visions for the future of the club industry. It challenges students to take strategic planning to the next level by looking to the future and predicting trends, operational practices and amenity offerings that will exist in clubs five, 10 and 15 years down the road.

The NU team conceived a social media app, "Intern Interaction," that is designed to enable both prospective college interns and private clubs throughout the country to post and search for internship opportunities, qualify prospective candidates and network.

Additionally, Niagara students Alexis Lecceadone and Matthew Nossavage were presented with The Club Foundation's most prestigious student award, the Joe Perdue Scholarship. The award provides tuition support to students who are pursuing careers in club management.

Niagara's student chapter adviser, Dr. William D. Frye, said, "Niagara University continues to be universally recognized as the premier student chapter in the nation. In just 10 years, since its inception in 2006, the student chapter has been named CMAA's best student chapter in the nation for eight consecutive years, earned six 'Club of the Future' first-place awards, and has had 11 Joe Perdue Scholarships awarded to nine different members. These achievements are unparalleled by any measure within the field of club management and are continuously validated by the placement of interns and graduates at the country's most prestigious and highly regarded clubs.

Ten years ago, nobody knew the name Niagara University in the discipline of club management; now it is what everybody is talking about."

Last year, New York Gov. Andrew M. Cuomo sent a letter to Frye and his students, congratulating them on their achievements.

The Club Managers Association of America is the professional association for managers of membership clubs. With nearly 6,700 members across all classifications, its manager members run more than 2,500 country, golf, city, athletic, faculty, yacht, town and military clubs. The objectives of the association are to promote and advance friendly relations among persons connected with the management of clubs and other associations of similar character; to encourage the education and advancement of its members; and to assist club officers and members, through their managers, to secure the utmost in efficient and successful operations.

Niagara's College of Hospitality and Tourism Management offers undergraduate degree programs in hotel and restaurant management, sport and recreation management and tourism and event management, as well as a graduate program in sport management. To learn more, call 716-286-8279 or visit www.niagara.edu/hospitality.