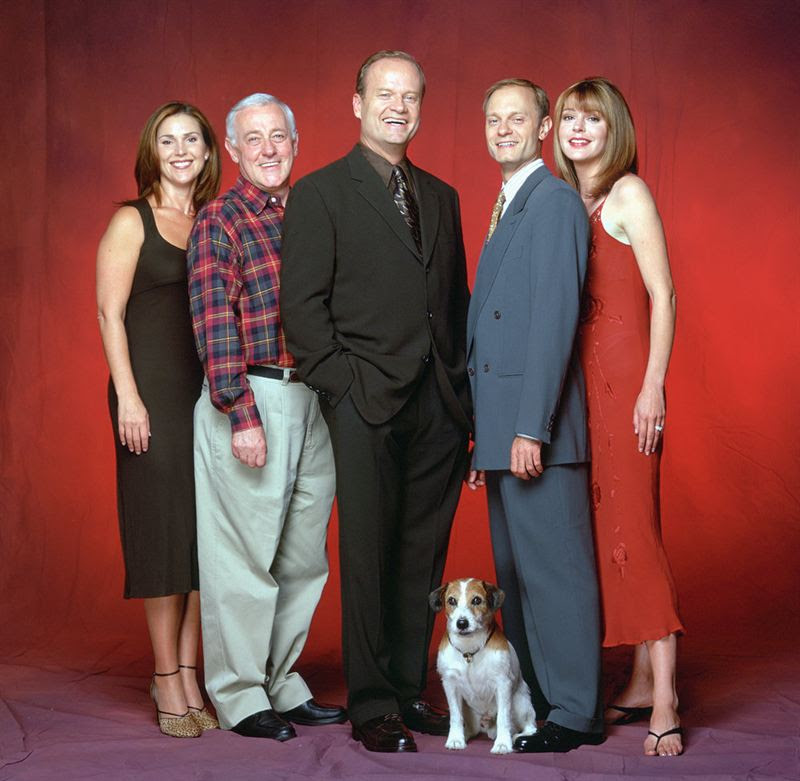 The cast of "Frasier." (NBC photo)

Five-time Emmy Award winner Kelsey Grammer will serve as host. Grammer is, of course, best known in television history as Frasier Crane, who was first introduced on NBC on "Cheers" before moving on to "Frasier" - tying the record for the longest-running (non-animated) character on television at 20 years with James Arness from "Gunsmoke."

"We're so pleased to have the Paley Center paying tribute to NBC on its 90th birthday," said Robert Greenblatt, chairman, NBC Entertainment. "Founded in 1926 by RCA, NBC is one of this country's most significant cultural legacies. The list of iconic stars and programs over the years is mind-boggling, and our thanks to Kelsey Grammer - one of the best - for coming back home to host this special. It's remarkable for any company to survive for nearly a century, and we're especially proud that NBC is still going strong as the leading network even to this day."

"The Paley Center is so proud to bring to life this special celebration of NBC's 90 incredible years," said Maureen J. Reidy, the Paley Center's president and CEO. "As the nation's leading voice in the discussion about the cultural, creative and social significance of television, the Paley Center is uniquely positioned to bring this memorable television experience to TV audiences around the world. This special will show why, for 90 years, NBC has enthralled generations with its groundbreaking and iconic programing."

For nine decades, NBC has brought the American public a huge array of personalities, characters, programs, news and sporting events. Beginning with its first radio broadcast from the Waldorf Astoria Hotel in New York, NBC's legacy is monumental and the special will take a look at it all - "Must See TV," dramas, sitcoms, workplace sitcoms, late night, variety shows and specials, reality and game shows, news, sports and "Saturday Night Live."

Among the special's additional highlights will be memorable moments from "The Tonight Show," "America's Got Talent," "Today," "Meet the Press," "Rowan & Martin's Laugh-In" and "The Wiz Live!," among many others.