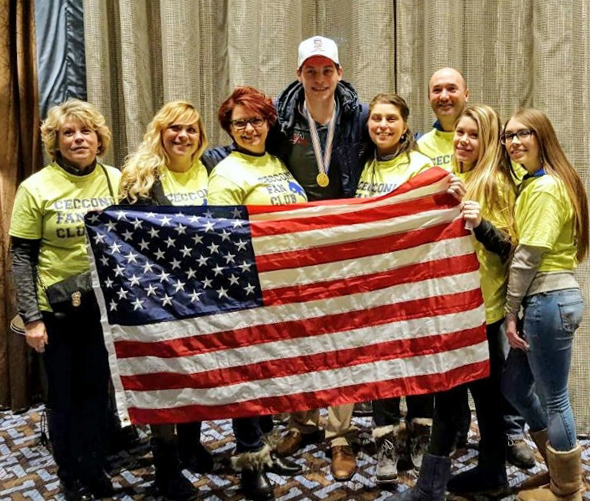 Joseph Cecconi, a native of Youngstown, competed on Team USA for the 2017 International Ice Hockey Federation World Junior Hockey Tournament in Montreal. He was one of 23 players from around the U.S. who competed, and brought home the gold by defeating Team Canada in a final 5-4 shootout victory on Jan. 5.

Cecconi played in all seven games for Team USA, which went undefeated in the tournament. He tallied 2 points, and finished with a plus-1.

This is Team USA's third gold medal in seven years.

"It was such an honor to be able to play for Team USA, and bring home the gold," Cecconi said. "It's an experience I will never forget."

The 19-year-old Cecconi resumes his defensive position with the Wolverines of the University of Michigan when the team faces off with Minnesota on Jan. 13-14.

"He's one of our steadiest defenseman," head coach Red Berenson told sports editor Mike Persak of the Michigan Daily. "I'd say he's a solid, defensive defenseman. He stays at home, blocks shots, kills penalties, he's got a smart stick, he's hard to play against and he's just one of those elements that you can't just replace him with another player."

Cecconi started his hockey career in the Niagara Jr. Purple Eagle instructional program, and progressed through to the Wheatfield Blades U12, Buffalo Regals U14 and Buffalo Sabres U16, before he was drafted into the USHL, and ultimately picked up by the Muskegon Lumberjacks. From there, he received a full scholarship to the University of Michigan as a natural freshman, where he is currently a sophomore enrolled in the College of Literature, Science and the Arts.

Cecconi was drafted by the Dallas Stars in June 2015.