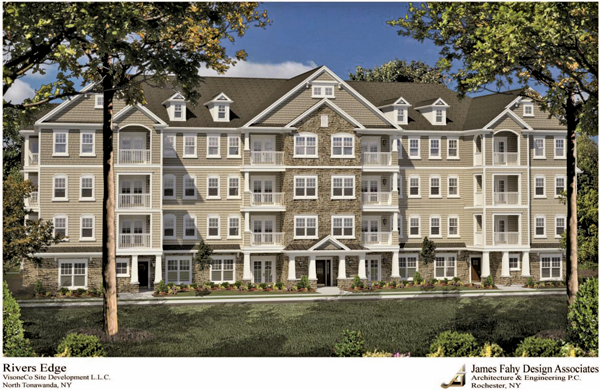 Shown is an artist's rendering of one of River's Edge Development's apartment buildings. (Image courtesy of VisoneCo Site Development)

After receiving positive feedback from residents and local officials during a public hearing on Tuesday, the Niagara County Local Development Agency will consider granting a tax break for VisoneCo Site Development's proposed $20 million housing and retail complex along the Niagara River in North Tonawanda.

The project, titled River's Edge Development, would be built on a 6-acre parcel at 600 River Road. It would consist of the construction of 100 residential market-rate apartment rental units. Two 12,000-square-foot four-story apartment buildings will each hold 36 units. Three 10,000-square-foot single- story town home buildings will hold eight to 10 units. Available would be one-, two- and three-bedroom units.

The company, which has already purchased the parcel, requested tax break assistance from the IDA after it found the land's soil to be contaminated with low-level metals. The company participated in the New York state brownfield program to remediate the site. The process took more than two years to complete and cost more than $1 million.

"The cost is so above and beyond normal circumstances that you would run into," said Lucian D. Visone, owner of VisoneCo Site Development. "Any development that would go in there - no matter if it is apartments or a plaza or whatever - would be faced with the same site conditions."

He added, "The cost is too exorbitant to deal with without the help."

The IDA is expected to vote on the project next week.

Pappas said he and the North Tonawanda's Common Council members are fully in support of the project.

"It provides a very nice start of a transition from an old industrial area into, now, kind of a nice area for people to live in right on the river with public access, right near the parks," he said.

Pappas said he does not think the company will have an issue finding occupants.

"We've already had people inquiring about it," he said.

North Tonawanda resident David R. Jakubaszek said the project is an "opportunity for the City of North Tonawanda to enhance its growth and to continue to become a destination."

"I'm for this project simply because the site has been vacant for the past 40-some years."

He said the site was formerly occupied by Tonawanda Iron Works.

"Anything that can be done to get a brownfield back into service is something that I, as a taxpayer, am all in favor of," Taylor said.

Shown is an artist's rendering of one of River's Edge Development's apartment buildings. (Image courtesy of VisoneCo Site Development)