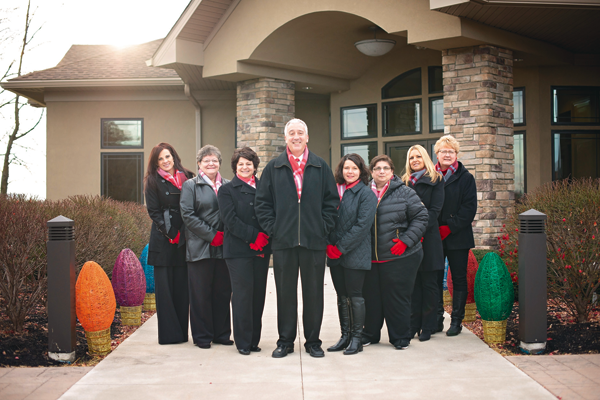 Local businesses and community members will be honored at the Town of Niagara Business and Professional Association's annual dinner and awards ceremony at 6 p.m. Wednesday, Jan. 25, at the LaSalle Yacht Club, 73 S. 68th St., Niagara Falls. Admission is $40.

The event will include a recap of the association's highlights of 2016, as well as an overview of goals and plans for 2017.

A basket raffle will also be available. All proceeds will go toward TNBPA projects, including scholarships and community support initiatives.

Overall, the event is "an excellent opportunity for small business owners to get together collectively, and network, share in recognition of each other's successes and I think that's very important," said Lisa Scalzo, chairwoman of the event. "Oftentimes the small businessperson doesn't stand out compared to some of these larger vendors out here. I think it just reinforces a great sense of community between them."

This year, another award has been created, titled the Legacy/Memorial Award.

"We thought it was a great way to recognize and honor the memory and the work of business owners that have passed away," Scalzo said.

This year's honorees are as follows:

At the age of 14, Anthony Villani started his own company, titled Villani's Lawn & Landscape LLC. His entrepreneurship has grown to include three companies that specialize in commercial landscape design and maintenance, commercial snow removal, and heavy equipment operation and rentals. By the time he was earning his bachelor's degree at the State University of New York College at Buffalo, he had obtained a year-round maintenance contract with the Fashion Outlets of Niagara Falls. His work can be seen in places all over Western New York.

Besides monetary donations, Villani often contributes his company's services for organizations in WNY, as well.

Last summer, he served as chairperson for the Mount St. Mary's Golf Tournament.

Business of the Year:

Capital Management Group of Niagara Inc. was founded by Mark and Jean Catanese in 1991. Mark had formerly been a New York Life financial adviser and understood the need to provide a comprehensive range of services, have the freedom to be independent, work for the client, and not be dictated to by one company or product.

In 1996, Capital Management Group was located in the old M&T Bank building on Military Road. In 2001, Mark and Jean purchased their home headquarters on Williams Road in the Town of Wheatfield. They were assisted by the Small Business Administration, and First Union Bank awarded them with the SBA Award that year.

In 2008, with the assistance of the Niagara County Industrial Development Agency and the payment in lieu of taxes program Capital Management Group, they expanded their business, doubling their office space, and adding additional employees and advisers.

This year, with the purchase and implementation of succession planning for one of their retired financial advisers, Mark and Jean Catanese, as financial advisers for Cadaret Grant & Co. Inc., provide retirement, investment and estate planning to families, businesses and employees of many nonprofits of the Erie Pennsylvania region.

Capital Management Group of Niagara Inc. has been instrumental in providing expertise to TNBPA members and associated organizations in such areas as employee benefits, health insurance and group life insurance. Mark and Jean also continue to be a loyal supporter of Opportunities Unlimited of Niagara, along with many other nonprofit organizations in the Western New York and Pennsylvania regions.

Employer of the Year: Manente Orthodontics

Dr. Salvatore Manente, owner of Manente Orthodontics, takes pride in the support his team provides him. He is honored to have employees who have been dedicated to his practice for many years. He is grateful to have a team with outstanding work ethics. Manente shares his Employer of the Year award with his family, employees and community, because without them, he would not be as successful in life.

Manente is a native of the Town of Niagara. He graduated from LaSalle Senior High School and later received his undergraduate degree in computer science from Niagara University. He then attended the State University of New York-Buffalo, where he received his Doctorate of Dental Surgery with honors.

To advance his knowledge in the field further, he completed a three-year orthodontic residency at the University of North Carolina at Chapel Hill and graduated with a master of science degree. In 1996, Manente became a partner with an orthodontic practice that was established in the early 1950's on Third Street in Niagara Falls. One of the practice's biggest accomplishments occurred in 2011, when it moved its office location to Military Road, which allowed patients to be comfortably treated in a state-of-the-art facility with new amenities.

Employee of the Year: Jennifer Nichols of KeyBank

After obtaining a degree in English from Niagara University and a masters in library science from the University at Buffalo, Nichols began working at the Buffalo & Erie County Public Library. She eventually changed careers and found herself at KeyBank and hasn't looked back since.

Nichols takes time to get to know her clients, who are like an extension of her family. Whether she is helping them celebrate the birth of a new grandchild, congratulating them on the purchase of a new home or offering support at a time of loss, Nichols does everything she can to offer support.

One of Nichols's favorite parts of helping her clients is solving mysteries associated with their accounts.

This is where her educational background and skills as a former librarian come into play.

She will exhaust all possible options to find a resolution for someone.

Nichols would not be able to do the work she does without the loving support of her family, including her husband, Ron, and her two children Abby and Logan.

Nichols also attributes a lot of her success to her coworkers. They are her support system and she does whatever is needed to help the branch be successful.

Citizen of the Year: Daniel Maerten

Daniel Maerten is a licensed master plumber and works in both Niagara and Erie counties. He worked as a plumbing contractor with his father, Glen L. Maerten, for most of his career. After his father retired, Maerten began his own company, Daniel Maerten Plumbing & Heating LLC.

Aside from his career, Maerten serves as secretary of the Wheatfield Business Association.

He is also the president of the Kiwanis Club of Niagara-Wheatfield.

Maerten, along with club members, serves as parade marshal for the Niagara Electric Lights Parade.

Through his involvement with the club, Maerten has initiated student leadership programs, including Kiwanis K-Kids at West Street, Errick Road and Colonial Village elementary schools. This year, a Kiwanis Builder's Club has been chartered at Edward Town Middle School.

Maerten has lived in the Town of Wheatfield since 1964. He graduated from Niagara-Wheatfield and attended Alfred Tech and Niagara County Community College. Maerten has one son, Trevin, who enjoys volunteering and giving back to the community.

The late Thomas Broda was a lifelong resident of the Niagara Falls area.

He graduated from LaSalle High School and received his bachelor's degree in English from the University of Geneseo. To continue his education, he attended Niagara University for postgraduate studies.

While raising two children with his wife, Jean (Calvello) Broda, he worked at Helmel Engineering in sales and software development and stayed active in his family's business, Broda Machine Co. When his father, Walter, passed in 1985, Broda chose to jump in the driver's seat of Broda Machine and grow what his father started. With a lot of work and sleepless nights from Broda, the company became a successful modern machine shop.

Broda also was a co-founder, along with his lifelong friend Kevin Schul, of Touchstone Calibration, a service company for coordinate measuring machines.

In his spare time, Broda invented the Niagara Daredevil Barrel Putter, which is manufactured at Broda Machine. His love for Niagara Falls helped with the naming of his unique golf putter, which is United States Golf Association approved.

Broda's son, Matthew, is now president of Broda Machine Co. and his daughter, Lindsay, is the company's office manager.

Lindsay, with her husband, Michael Fiore, owns the Village Bake Shoppe in Lewiston, where Broda would love to unwind with a cup of coffee.

Broda's legacy lives on within Broda Machine. Although his desk remains empty, his guidance and teachings are still remembered everyday on the shop floor.