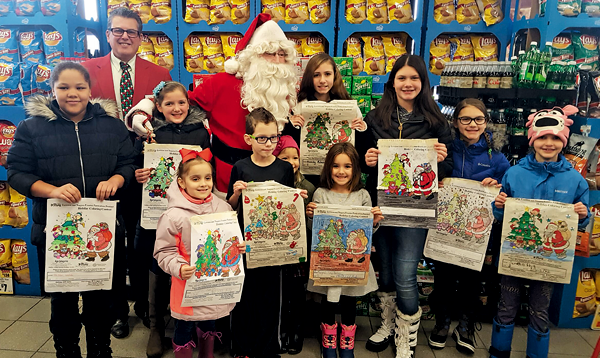 DiMino Tops Lewiston once again sponsored the Christmas Coloring Contest, wherein children decorated a holiday scene published inside the Sentinel. Entries were displayed inside the village supermarket, where winners were announced last weekend.

In the age 7-9 category, Makayla Farnham won first prize, while Chloe Marcyan was second and Matthew O'Donoghue was third.

New this year, a special all-ages "Most Creative" award was presented to 8-year-old Samantha Draper. She received a stocking, which Tops storeowner Anthony DiMino said "was taller than she was."

The children whose work adorned the Tops foyer, "They're really excited" to have shared their work with the community, DiMino said.

And the winners? "They're all smiles," he said. "Their parents are all proud of them."

"It's something we've done traditionally for as long as the Sentinel has been our local newspaper."

"All the kids in the area are excited about doing it, and we are excited to do it, too," he added. "It's part of Lewiston. It's part of what we've been doing for a long time. We're proud to do it."