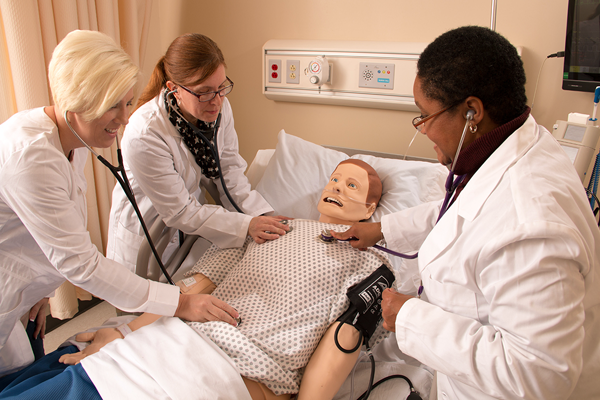 E. John and Jeanne C. Finn have made an $875,000 gift to support the Jerome Patrick and Alice Conley Corcoran Scholarship at Niagara University.

Their most recent gift brings the endowed scholarship fund over $1 million.

The scholarship is offered to students from Central and Western New York who demonstrate financial need and plan to study in Niagara University's School of Nursing. It was established by the Finns in 1997 in memory of Jeanne Finn's parents. More than 50 students have received the scholarship since its inception.

Jeanne Finn was inspired by her mother, Alice Conley Corcoran, a gifted caregiver, who instilled in her an appreciation for the nursing profession and, hence, the creation and support of the scholarship at Niagara University.

"We are extremely appreciative of Jack and Jeanne Finn's continued support of Niagara University, which serves as an enduring tribute to Jeanne's parents and a powerful testament to the excellence of our nursing programs," said the Rev. James J. Maher, C.M., president of Niagara University. "Thanks to the generosity of the Finns, more students will have an opportunity to be connected with the Vincentian spirit and our acclaimed School of Nursing, thus inspiring them to be lifelong caregivers of people in need, especially to those in our nearby communities."

E. John Finn held executive positions with The Carborundum Co., the Kennecott Corp., and the Standard Oil Co. The Carnegie Mellon University graduate is also the retired chairman of Dorr-Oliver, a former partner with Broadsword Partners LLC, and a previous director of ART, Esterline Technologies and Stantec Inc. He served as a Niagara University trustee from March 1983 to December 2002, was named a trustee emeritus in December 2003, and presented with an honorary doctorate in 1987.

Jeanne Finn also completed undergraduate studies at Carnegie Mellon University, before earning a graduate degree in education from Niagara University in 1971. She founded and served as director of the Fantastico Tutorial program, a volunteer effort that provides academic assistance and language instruction to children and teenagers in the disadvantaged Hill Section of New Haven, Connecticut. She also taught courses to women inmates at a maximum-security prison in Connecticut. In light of her work with those in need, Niagara University awarded Jeanne Finn its Caritas Medal in 2007.

It has been a banner fundraising period for student scholarships at Niagara University.

On Nov. 18, NU announced it had received a $500,000 gift from Robert and Lynda Engel in support of the Rev. Joseph L. Levesque, C.M. Endowed Scholarship. Later that day, the Catholic and Vincentian institution netted more than $200,000 for student scholarships at its annual President's Dinner.