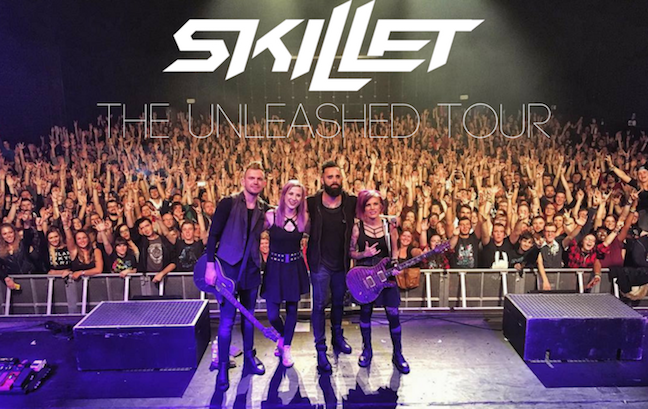 On heels of most successful mainstream headline tour of their career, Skillet continues to sell-out and pack crowds across Europe, including London, Paris, Vienna, Budapest

2016 is proving to be a milestone year for Skillet, and 2017 is shaping up to continue the trend. Coming off the band's most successful European headline run to date, which included numerous sold-out performances, Skillet will embark on the second U.S. leg of "The Unleashed Tour."

The 26-city tour will kick off Feb. 8 in Clifton Park, and will make stops in Philadelphia; Spokane, Washington; Los Angeles and Denver, to name a few. The tour hits The Rapids Theatre in Niagara Falls on Feb. 11.

Sick Puppies and Devour The Day will be support on these new dates. An exclusive presale for The Panheads (The Official Skillet Fan Club) will go live on Wednesday. Tickets and VIP packages, including an opportunity to meet the band, will be available. Fans can sign up for the fan club at: http://www.skillet.com/become-a-member. Public onsale for all shows will be Friday, and ticket links can be found at: http://www.skillet.com/tour.

Skillet will be touring in support of their latest album, "Unleashed." The 12-track, critically acclaimed album is available via all physical and digital retailers nationwide. The debut single "Stars" hit No. 1 at Christian hot AC. "Feel Invincible" recently went to No. 1 on both the active (Mediabase) and mainstream (BDS) rock charts. The video for "Feel Invincible" has been viewed over 21 million times on YouTube (https://youtu.be/Qzw6A2WC5Qo), and streamed over 16 million times on Spotify (www.smarturl.it/StreamSkillet).

Skillet will also be making the rounds throughout the U.S. festivals this spring. The band has already been announced for Creation Northeast on July 1 in Shirleysburg, Pennsylvania, and Creation Northwest on July 15 in Kennewick, Washington, along with several over notable Christian festivals and fairs to be announced. Tickets for these festival dates are already on sale.

Skillet has cemented its place as one of the 21st century's most successful rock bands. Selling more than 11 million units worldwide, the Wisconsin quartet has received two Grammy Award nominations and won a Billboard Music Award for the platinum-certified "Awake." Their double-platinum single, "Monster," is the eighth most-streamed rock song of 2015, with a total of 57 million plays (and counting) on Spotify. 2013's "Rise" bowed at No. 4 on the Billboard Top 200 upon release and received resounding and eclectic acclaim from the likes of USA Today and New York Times.