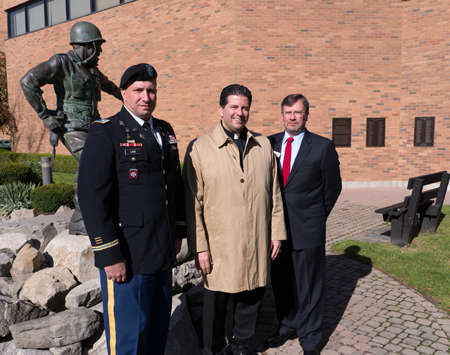 Niagara University has been ranked among the country's top 10 small private schools for American military veterans and their families, according to comprehensive results released Thursday by Victory Media.

NU has become a fixture in Victory Media's Military Friendly School rankings, as well as other lists that recognize institutions that are doing the most to embrace America's military service members, veterans and spouses as students.

The Military Friendly Schools list annually highlights the colleges, universities, community colleges and trade schools that demonstrate the greatest outcomes in positioning veterans and their families for success in the classroom and after graduation.

New for its 2017 rankings, Victory Media also recognized institutions for excellence in various categories, identifying not only if schools are military friendly, but to what degree.

Niagara ranked in the top 10 for private colleges and universities with less than 10,000 students.

"Earning this prominent designation speaks profoundly to the daily work of our administrators, faculty and staff to create an environment that offers educational opportunities and assistance to those who have given of themselves to make our freedoms a reality," said Robert Healy, Niagara University's director of veterans services. "We are grateful for the service of our veterans, and we're committed to supporting them achieve their goals as they transition into civilian life."

The Military Friendly Schools designation process includes extensive research and a data-driven survey of leading colleges nationwide. The survey, methodology, criteria and weightings are developed with the assistance of an independent advisory council of educators and employers, and tested by Ernst & Young LLP based upon the weightings and methodology established by Victory Media.

"All of our Military Friendly award recipients set the standard for excellence," said Daniel Nichols, chief product officer of Victory Media and head of Military Friendly development. "They offer exceptional examples of what it means not just to build a program that meets federal requirements, but one that serves the military and veteran community from classrooms to careers."

Niagara University has a long history of honoring and supporting military students, veterans and their families. The Catholic and Vincentian university supports a U.S. Army ROTC program, and participates in the Department of Veterans Affairs GI Bill Yellow Ribbon Program, a provision of the Post-9/11 Veterans Educational Assistance Act of 2008.