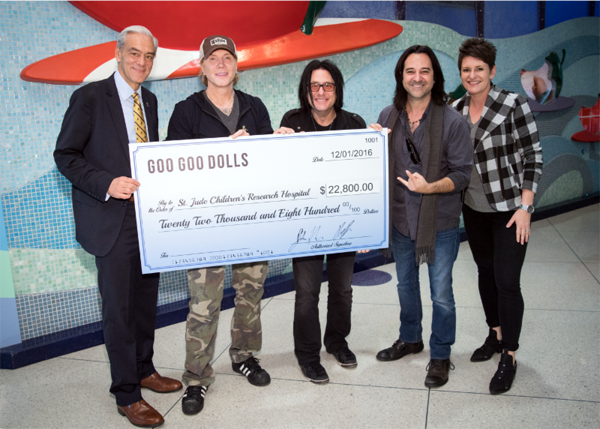 The donation received from Goo Goo Dolls helps ensure families never receive a bill from St. Jude for treatment, travel, housing or food - because all a family should worry about is helping a child live.

"Visiting St. Jude was a real eye-opener," Rzeznik said. "It's amazing that so much good can be done in one place by so many good people. We are grateful to our amazing fans for their generosity and enabling us to present this money to help St. Jude."

This summer, the Goo Goo Dolls began supporting Music Gives to St. Jude Kids, a program that mobilizes the music community to join the fight against childhood cancer and other life-threatening diseases, and raise funds and awareness for St. Jude Children's Research Hospital.

St. Jude has a long history of support from the music industry since the hospital's beginning in 1962, when Thomas called on entertainers such as Elvis Presley, Frank Sinatra, Ray Charles and more to join his cause.

The Goo Goo Dolls are looking forward to a continuing relationship with St. Jude.

The multiplatinum, Grammy-nominated band is one of the most globally respected and influential forces in popular music, selling more than 12 million albums since 1986. The Goos have scored 14 top 10 radio hits (more than any other artist in the history of the Hot AC format), including "Name," "Slide" and "Iris," the latter spending nearly 12 straight months on the Billboard charts and holding the No. 1 position for 17 consecutive weeks.

St. Jude Children's Research Hospital is the only National Cancer Institute-designated comprehensive cancer center devoted solely to children. Treatments invented at St. Jude have helped push the overall childhood cancer survival rate from 20 percent to 80 percent since the hospital opened more than 50 years ago. St. Jude is working to drive the overall survival rate for childhood cancer to 90 percent, and staffers won't stop until no child dies from cancer.

St. Jude freely shares the discoveries it makes, and every child saved at St. Jude means doctors and scientists worldwide can use that knowledge to save thousands more children.

Join the St. Jude mission by visiting stjude.org, "Liking" St. Jude on Facebook (facebook.com/stjude) and following it on Twitter (@stjude).