New York City is the definition of a melting pot. Filled with all types of races, ethnicities and backgrounds from all over the world, it can be concluded New York City is one of the most diverse cities in America.

New York City. The most popular city in the United States, has a lot to say about the recent election of Donald J. Trump. Nothing has affected NYC such as the election of the soon-to-be-president.

Trump's election has New York City on the verge of cracking its shell. Trump is a man of many words, some vulgar, and some foul vocabulary that would not usually be expected of a nominee running for president of the United States.

Trump was this year's nominee to leave the country speechless after his campaign when running for president.

New York City tends to be very accepting of many things when having to do with this country. This city that we so love and cherish, though, has a big problem with this year's election.

New York City is not one to stay quiet. Their rage regarding this election was seen all over the country. The people of New York City, on the night of the election, woke up and said "He Is Not My President!" It's a line that has become very popular amongst the residents of this city that never sleeps and with those countrywide.

The election caused a lot of commotion in the New York, with people protesting, and not willing to accept the fact that this man is actually going to be president - and not much can be done about it.

NYC has been blowing steam with regard to this election for the past few weeks, with people standing outside of  Trump Tower on 5th Avenue and 59th Street, where Trump and his family were staying the night of the election.

An important person who spoke on behalf of this city was Mayor Bill de Blasio, who shared some very strong words regarding the president-elect.

"This city is very distraught and fearful of his presidency that is upcoming," de Blasio said at a press conference right outside of Trump Tower.

Following this election, NYC showed its true rage when people rallied in the heart of the city against Trump. Many of the people participating in these rallies were of different countries and ethnicities.

Following these actions, New York City recently had to do some removal of Trump's name on some of his Tower locations on behalf of safety for the buildings and business that resided within the buildings. 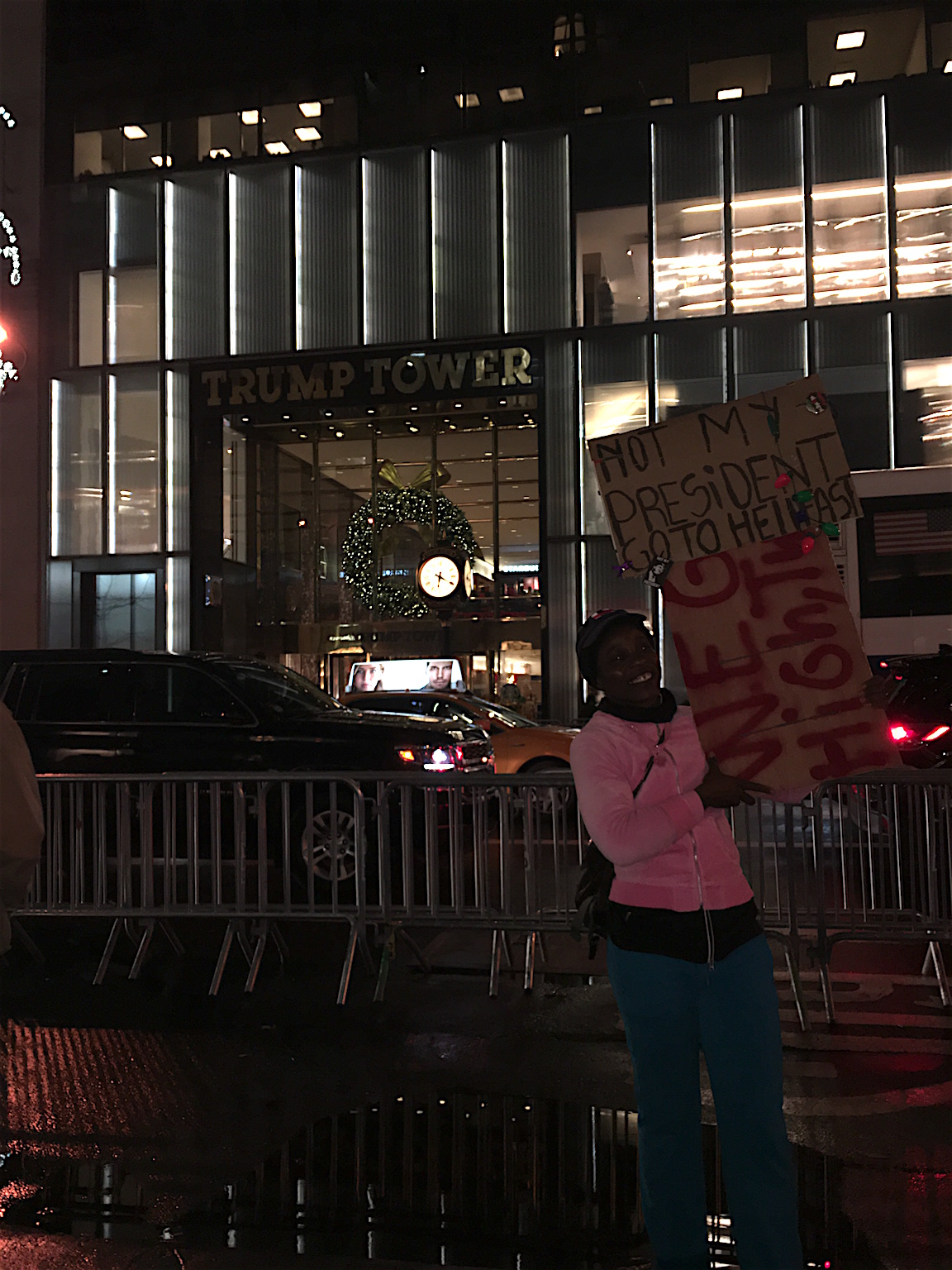 A woman holds a sign in front of Trump Tower stating, in part, "Not My President."

Trump, being a businessman, has a lot of buildings in the city that, in the past few weeks, have been rallied out front and protested in front by several amounts of residents of NYC.

The aspect that bothers this city the most is not how Trump went about his election, but mostly his past history. So stated an interviewee when asked what she fears the most regarding Trump and why. Jessica Williams said that it is not how he ran for his presidency or the things that were said during his presidency, but it is that this soon to be president has a history with several issues. Examples cited include issues with the violations and treatment of woman, as well as past history toward races such as Mexican and Muslim people.

This city has a lot of concerns regarding this election, because New York City is so diverse and racially united. Trump's election, him being the man he is, caused a lot of turmoil in the city.

Weeks after the election, there were still people protesting in front of Trump Tower, hoping that somehow they can provide the change they want.

The fact that the mayor had to speak out for the city shows to others that they are not trying to accept him as their president. New York City is known for a lot of things, good and bad, but recently it has chosen to be known for not accepting this man to begin his presidency nor continue it if he does.

New York City is scared. People are scared and fear the things this man can do if he is to actually reach office. The damage Trump could cause this country is the main reason why the city is concerned.

New York City has been backlashing in all types of ways, to make sure voices are heard. People refuse to let this election go and pass without having a say in it.

de Blasio and several other popular figures such as Lady Gaga had a lot to say the night of the election.

Some people participating in the rallies all said similar answers when asked what bothered them the most about Trump possibly being our future president. They do not trust in him. They feel as though he will bring this country down to the ruins and his words are not to be relied on. The fact that he won the election is still unbelievable to a lot of Americans today.