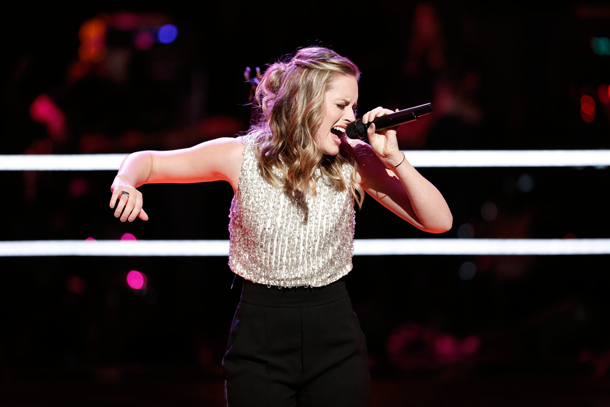 Blake Shelton to perform hit new single 'A Guy With a Girl' on 'The Voice'; Hannah Huston returns

In addition, season 10 alum Hannah Huston returns for a special 'Amazon homecoming' performance of her new single 'I Alone Have Loved You'

NBC's "The Voice" will welcome its four-time winning coach Blake Shelton to the stage as he performs his new hit single "A Guy With a Girl" on Tuesday, Dec. 6 (8 p.m. ET). The song is the third single from his current album, "If I'm Honest," which is the best-selling country album released this year.

Shelton recently announced plans for next year's "Doing It to Country Songs" tour, which will kick off in February and includes former "Voice" artist RaeLynn as his opener. Shelton also just won the American Music Award for Favorite Male Artist - Country.

Multiplatinum, Grammy-nominated band OneRepublic will also appear on the Dec. 6 live show to sing "Let's Hurt Tonight" from their new album, "Oh My My." The song will also be featured in the upcoming Warner Bros. film "Collateral Beauty."

The quintet recently released "Oh My My," its fourth studio album, on Oct. 7 on Mosley/Interscope Records. The follow-up to "Native," "Oh My My" debuted at No. 3 on the Billboard Top 200.

In addition, season 10 finalist Hannah Huston will return to the show on Tuesday for a special homecoming performance. Huston, who advanced to the final four as part of Team Pharrell, will debut her new single, "I Alone Have Loved You." Fans voted through Amazon Echo and "The Voice Official App" to determine which "Voice" alumni artist would return for a homecoming performance.

"The Voice" is averaging a 3.1 rating in adults 18-49 and 12.2 million viewers overall with its Monday and Tuesday editions in "most current" results from Nielsen Media Research, giving it an increases versus the prior cycle of 3 percent in 18-49 rating (3.1 vs. 3.0).

"The Voice" ranks as TV's No. 1 alternative series in adults 18-49, a status the show has maintained over the past four seasons. With both its editions ranking in the top 10 among entertainment telecasts on the "Big 4" networks in adults 18-49 and total viewers, "The Voice" remains a key contributor to NBC's consistent nightlong wins among those networks on both Monday and Tuesday nights.