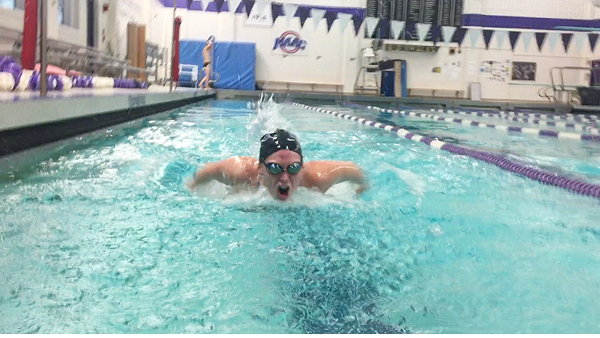 Julia Casolo trains to make a comeback race this February at the MAAC Championships. (Photo by Nastassja Posso)

Julia Casolo strives for greatness in her collegiate swimming career

"This season I've been trying to remind myself during practice of the immense happiness I felt after winning MAACs my sophomore year. Keeping this feeling in my head helps remind me of what I'm working so hard towards," Julia Casolo said after finishing off a challenging afternoon practice.

After earning second place her freshman year, she set a goal of improving her personal record and winning the gold in the 100-yard butterfly, and that's exactly what she did.

This was no surprise to the coaching staff or her teammates. Casolo has a tough racing mentality and training habit.

"Her work ethic is very strong during practices. She's very focused on getting better and, along the way, she motivates her teammates positively. And because of that, herself and everyone around her gets better and works harder," Purple Eagles men's swimming captain Shawn Warner said.

"Julia came in and surprised us with a second-place finish in the 100 fly her freshman year. She worked extremely hard her second year and earned her victory. This year she is already way ahead of last year. I can't wait to see how she performs," coach Ben Nigro said.

Casolo is from York, Pennsylvania, and has been swimming since she was 8 years old. She has always been passionate about the sport, but the offer of doing it collegiately was more than enough of a reason to choose Niagara University.

One of Casolo's many accomplishments this season was being chosen to represent NU as the women's team captain as a junior. At times, managing a swim team while keeping up with courses can become challenging, but Casolo never loses her focus, she keeps her eyes well on the prize. 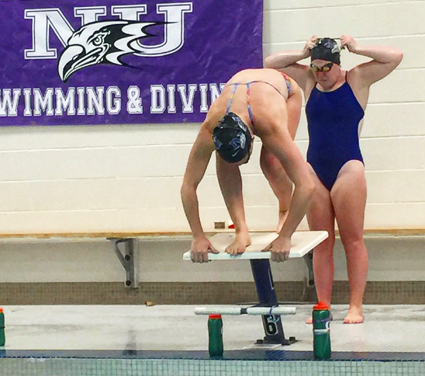 Julia Casolo begins to focus on the little things as she prepares for Akron. She emphasizes mental strength. (Photo by Nastassja Posso)

"I set goals and I write down what I can do to achieve these goals," Casolo said. "Every practice I find myself picturing myself in a race at MAACs fighting to be a MAAC champion. This helps me work on my finishes and beating the person next to me. The way you practice will be the way you perform, so I think it's important to practice racing even if it's just against your teammates."

Casolo currently holds all NU relay records, except for the 800 freestyle relay, and is less than a second away from breaking the team's 100-yard fly record. She is known for her endurance in her rigorous individual races.

What is most outstanding about her performances throughout the season is that, typically, fresh out of season times are supposed to be significantly slower than each person's personal records. However, Casolo manages to stay a minimal amount of milliseconds off her best time.

"I honestly just try to relax," she said when asked about specific pre-race thoughts. "I tell myself over and over again to have fun. Before the 100 fly I tell myself that this is my race, and that I'm blessed to have the opportunity to race. I try to look around at the atmosphere before every race and remind myself that I was given an awesome opportunity and it shouldn't be anything except fun."

As the teams prepare to face Akron on Dec. 2, Casolo trains arduously in pursuit of continuing her winning streak at MAACs, and obtaining a school record in her individual event - as well as a personal best time.

"I think our team this season has taken all the right steps in order to prepare for our bigger meets such as MAACs and Akron," Casolo said. "Day in and day out, we have all put our hearts into each practice, and there's nothing but greatness that is going to come out of that. I think we gained a really strong freshmen class, which has provided us with great depth that is going to show at conference unlike previous years. As we are coming up on the halfway point of the season, we're all in great shape and now is time to start preparing ourselves mentally for these bigger meets."