How concussion protocol has recently changed over the years

A concussion is defined as "a traumatic brain injury that alters the way your brain functions," typically after a hit to the head, or a fall. Common symptoms include headaches, dizziness, confusion, memory loss and trouble concentrating. These symptoms can appear immediately following the hit or fall, or could come up hours later.

Protocol has changed over the years on how to treat athletes who are suspected or have suffered a concussion.

"I got my concussion in 2008, when I was pitching as a sophomore in a game for Niagara County Community College. I was hit in the head off a line drive, leaving me with a contusion and headaches. I went to the emergency room as a precaution, but was cleared to play again by trainers within a week," said physical education teacher Vincent Cuviello.

In 2008, schools were encouraged to have a concussion protocol, but it was not yet required by law.

Washington was the first state to pass a concussion law, named the Zackery Lystedt Law, in 2009. This required athletes to be examined by a licensed health care provider when showing any signs of a concussion before returning to play.

In the years following, all states had laws on concussions and returning to play.

The Management Concussion Act of 2012 in New York required student-athletes that "have suffered a concussion in a school sport or gym, to be sidelined for at least 24 hours."

This act requires athletes to be symptom-free for "at least 24 hours to be cleared by a physician to return to play." It also requires education and training of concussions for all coaches, athletic trainers and other school personnel, along with information provided to parents about concussions, prevention and treatment.

Now, schools use the Immediate Post-Concussion Assessment and Cognitive Test, or imPACT, a baseline test for athletes before the season begins. This computerized test is given every two years to give athletic trainers, or other school personnel, a test to help evaluate individual athletes after suffering a concussion.

This online test takes about 30 minutes to complete, but can help save an athlete time to recover in the long run.

Once an athlete has been suspected to suffer a concussion, he will be removed from play. He will be observed and assessed on the sidelines. The Sports Concussion Assessment Tool 2 will be used by the athletic trainer for athletes ages 10 and older.

Scores on the SCAT2 and symptoms determine whether he will be allowed to go back into the game.

"Initially depending on their symptoms, the athlete sits for 20 minutes to ensure they improve, if not, we re-assess with exertion exercises, like running and push-ups. If they don't improve, they stay out of the game," said Niagara Catholic Jr./Sr. High School athletic trainer Ana Salgado. 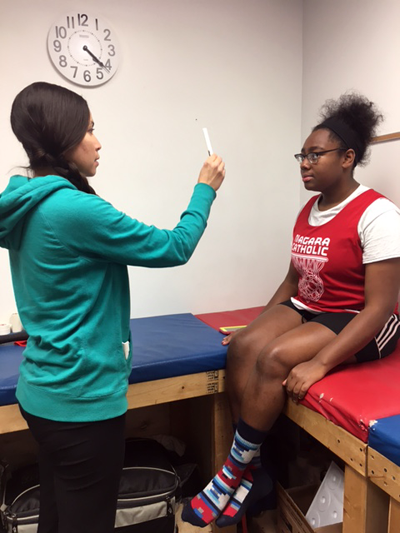 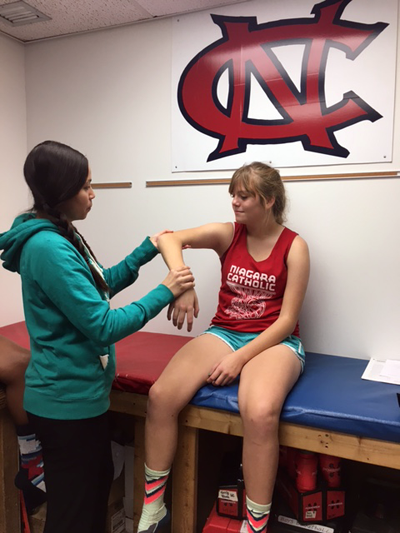 "When in Doubt, Sit It Out" has become the campaign for concussion prevention and treatment. It encourages athletes to get checked out if they have symptoms, because missing one game is better than an entire season.

"I've had two concussions, but the second affected more than just sports for me," said high school senior student-athlete Quasie Clarke. "I had headaches pressure in my head both times, but with the second I had memory loss, concentration issues and sensitivity to light and noise, which made going to school difficult."

Cuviello was only required to be symptom-free for 24 hours for his trainer to clear him to return to baseball. However, Clarke had to go see a doctor, take the imPACT test, and go through a five-day progression to be cleared to return to sports.

Second concussions usually require a bit longer to recover, but she was cleared within two weeks and returned to sports.

There two injuries were six years apart, and with much different protocol.

In many cases, if the symptoms lasted longer than two weeks without improving, physicians would consider having the student go to school for half days with more time to complete their school work. This would also include decreased amounts of time watching television and on cell phones to help the brain to rest.

When the student-athlete noticed improvement, he would be slowly put back into school and eventually sports, as well.

"Athletes have to be symptom-free for seven days before attempting to return to sports. They must re-take the imPACT baseline test with scores similar to their original. If they do that and get a clearance from their doctors, we can start five-day progression," Salgado said.

Five-day progression begins with rest and baseline test assessment. Day two begins with a "light aerobic activity" to increase the heart rate - usually running or biking. Day three is a "sport-specific exercise" that adds movement with an increased heart rate to noncontact drills. Day four is "noncontact training drills" that allow the athlete to participate in more complex noncontact drills. Day five allows the athlete to return to practice with his team.

Concussions have been brought up most recently in the National Football League and in the film "Concussion." Dr. Bennett Omalu discovered chronic traumatic encephalopathy, or CTE, in the brain of former NFL player Mike Weber, among others. Weber committed suicide at age 50. This disease is caused by repeated head trauma.

The NFL has increased its rules for treatment of suspected and diagnosed concussions to help keep players safe. NFL Commissioner Roger Goodell recently said the NFL will use $60 million for technological development, including improving helmets, and $40 million to help fund research for head injuries.

New discoveries and advancements are happening every day to prevent and treat head injuries in athletes of all ages.