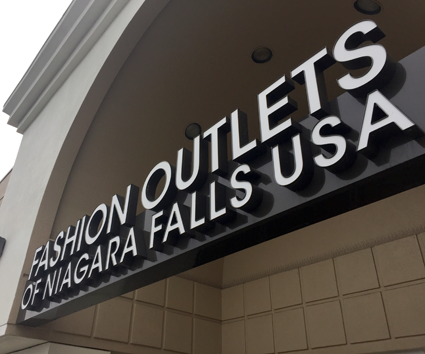 Shoppers will flock to locations such as the Fashion Outlets in search of Black Friday deals.

Black Friday: The dark side of the holiday season

By Olivia Gamziukas and Maxwell Wunderlin

Every year on Thanksgiving, stores all around the U.S. open for the biggest shopping day of the year. On Black Friday, people flock to stores around their area for special offers by retailers. It is noted as the first day of traditional Christmas shopping, because the prices and deals are exceptional this time of year.

To some, Black Friday is its own holiday, and every year even more customers show up to stores and malls for the revered festivities.

For most people, this time of year can be extremely expensive to purchase gifts for their family members and friends. The average person today is always on look out for a way to save money.

"I have eight people in my family, so there's no way I'm going to get them all a separate gift and pay full price," said Ashlee Bangs-Watson, a regular Black Friday shopper.

The reason why so many people participate in this day is because it is the only day of the year that stores offer these unbelievable deals.

It should be no surprise that people will wait hours to take advantage of these unprecedented holiday offers. Each year, more customers are waking up early the day after Thanksgiving.

The National Retail Federation, or NRF, has conducted a survey for the past decade on retail sales data. The amount of money spent by shoppers on holiday gifts in 2005 was $734.69 billion. This number rose to $805.65 billion in 2015 and is projected to rise even higher, to $938.58 billion, this holiday season.

Black Friday is the busiest day of the year for department stores and malls, and the past few years have seen an increased amount of customers getting to stores earlier. Many people will stand in line for hours, camping out the night or day before, just to get that flat-screen television for $100.

"I tripped over a man sleeping on the ground," said teen Gabby Fogarty of a past Black Friday experience. "I also saw two people fighting over a watch. It just wasn't worth it; no one really needs that watch."

In the past, lines have wrapped around buildings five or more hours before the store even opens. Determined customers are willing to stand in the cold for long periods of time just in order to get new furniture, appliances, tools, clothes, electronics and more.

"Waiting in a long line is nothing, as long as you're able to get gifts at low prices. If there's something I really want, I'll wait for it (later)," Bangs-Watson said.

To these dedicated shoppers, the wait is worth it. For some, however, the shopping chaos is not meant for them.

"Black Friday is just not worth it. I'd rather spend my Thanksgiving break with my family than waiting in line for the outlet mall," said Ryan Schiller.

Known by most as the "season of giving," the holidays are a special time intended to spread happiness. People are able to show how much they care for their loved ones during these cold winter months.

Sometimes, however, this love can translate to violence toward others. Individuals' undeniable passion to get their loved ones the best gifts can mean danger for anyone in their way.

Although the shopping madness is seen as a fun experience, or a light competition, these deals often lead people to do violent acts, all in the name of a product.

When asked of her experiences working in retail on Black Friday, PacSun employee Cameron Zmuda described the sheer chaos the day brings to the mall.

"It's always chaotic, to the point where people can't even move because there's so many people," Zmuda said. "People steal and push and throw stuff on the ground. Everyone's morals go out the window."

There have been multiple incidents of people fighting and wrestling over scarce, low-priced gifts. Recently, there have even been shootings, all in the name of shopping.

An article from The News Examiner in November of 2015 by Bailey Brown discussed the unprecedented number of people killed while shopping on Black Friday.

Brown said, "According to the Uniform Crime Reporting system, on the most recent Black Friday over 3,000 people were killed while trying to get their hands on bottom dollar prices."

Instead of graciously taking advantage of the amazing deal, Brown said, "Some shoppers turned violent on each other resulting in death, mayhem, and destruction across the nation."

For these reasons, it's important to keep yourself and your shopping partners safe on a day like Black Friday. Pent-up aggression and determination to get the best deal can cause some people to lash out in order to get a low-priced item.

"Try to think, if someone is in line and trying that hard, they might be less fortunate than you are," said Tommy Stedman, a college student. "They might need it more than you do."

Positive thoughts like this may be able to prevent potential violence in the future.

Focusing the day more on less-fortunate shoppers trying to provide something special for their loved ones may be helpful in reducing the frenzy.

Whether the huge discounts give people with lower incomes a chance to score big, or the sales are just another way to save money, people take the Black Friday deals very seriously.

And the statistics prove this, as well.

Just within the past decade, the total amount spent on Black Friday shopping has increased by $129.9 billion, to nearly $626.1 billion in 2015, according to the NRF. Even with the 2008 financial crisis, the increasing amount spent was able to regain its exponential progression within two short years.

With billions more dollars being spent every year, Black Friday popularity is not going away.

"Before going shopping, we like to have a list of things we want to get, and stores that we want to go to, this way you have a purpose while going there," said Brooke Gilbert, a freshman at Niagara University.

This is often seen as a great method for Black Friday shopping, as people are able to get what they want more efficiently, rather than frantically searching around. Using this technique allows customers to be aware of the deals and have the opportunity to purchase an item before it's gone.

It also allows for shoppers to know exactly where they need to go to find their products, making people feel more comfortable within the chaos of this shopping day.

The National Crime Prevention Council (NCPC) issued a list of safety tips, following the increasing violence amongst Black Friday shoppers. Its suggestions include keeping cash out of sight or using other methods.

"Consider alternate options to pay for your merchandise, such as onetime or multiuse disposable credit cards or money orders, including at online stores," the NCPC stated.

Finding new ways of going about your holiday shopping his year will help to ensure you make it out of the mall safely.

Whether you're going for the great deals or just to participate in the thrill of competition, Black Friday is sure to break the record book in one way or another.

Get the best Black Friday deals