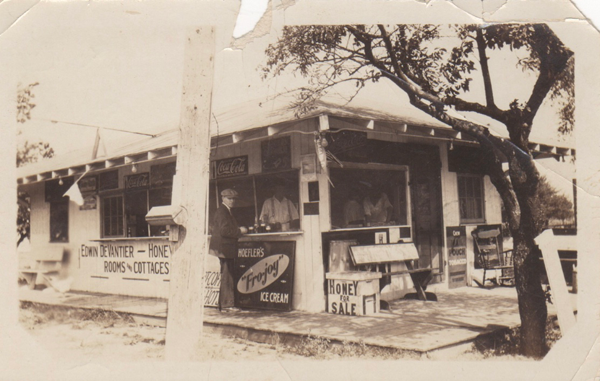 This picture was taken in the early 1920s, when the stand first opened. Products sold were advertised on signs and customers ordered at the windows. Edwin DeVantier is standing inside the front window as he waits on a customer.

The story behind a once well-known Niagara Falls Boulevard landmark

Proposed road construction on Niagara Falls Boulevard calls for a wider and supposedly safer road with sidewalks. Along with that plan comes the destruction of a normally unnoticed building by the side of the road. The stand sits there now physically empty, but metaphorically full of history and memories - especially for brothers Melvin and Elton DeVantier. The two are among few people who still remember and know the story behind the once well-known landmark.

Before both Melvin and Elton were even born, their parents, Edwin and Lily DeVantier, opened the stand in front of their house at 2761 Niagara Falls Blvd. At the time, the boulevard was not so busy. It was a two-lane highway made of bricks. Many people traveled along that road as they visited the Buffalo and Niagara Falls areas. That made the property a perfect location to provide a rest stop with refreshments for commuters. 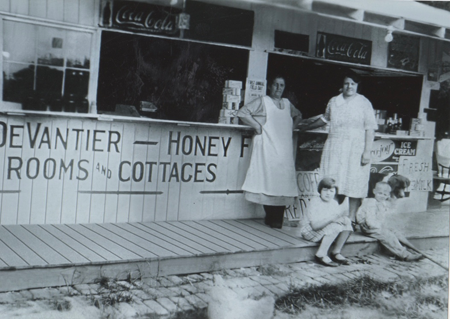 Pictured, from left, is Bertha and Lily DeVantier standing, and Hilda and Frank DeVantier siting in front of them. This photo was taken a few years after the stand had opened up.

"I believe the stand opened in the early 1920s," Elton said. "They had all sorts of things, such as Red Hot hot dogs, roast beef, coffee and ice cream."

The stand attracted many new people and regulars who would stop on their way home from church every week. The family made many great friends through its encounters at the stand. All sorts of people, from tourists to farmers to scouts, came to the stand. It became a well-known building.

Edwin was an outgoing man with many traits and hobbies. Not only did he sell hamburgers and hot dogs, but he had his own honey bees, which provided him with honey that was sold at the stand. That's how the roadside stand got its name: "Edwin DeVantier's Honey Farm." 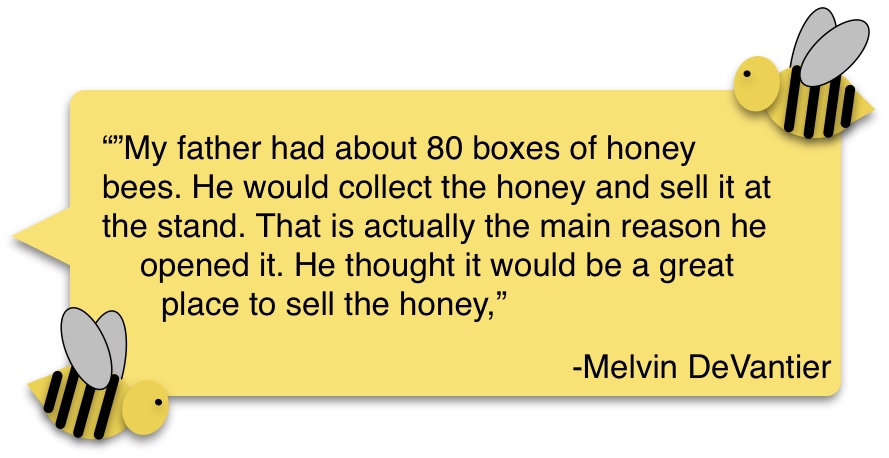 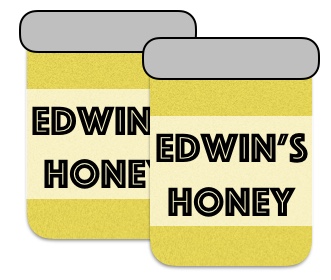 Besides selling honey, Edwin rented out some of his bee hives to local farmers and vegetable growers to increase pollination of their fields and crops. He enjoyed the bee-keeper lifestyle and kept the hives for a few decades.

Although the road was not as busy as today, accidents still occurred.

"One time, a car actually hit the building," Melvin said. "After that, we had to put new blocks under it to hold it up and fix the wall."

Luckily no one was hurt during the accident.

This photo shows a car that went off the road and hit the left side of the building.

With the rapidly increasing amount of travelers in the area, the need for housing accommodations increased. Edwin and Lily had built the very first campsite on the boulevard and many people were instantly attracted. The price was 50 cents per person and all facilities were included.

Back then, 50 cents was worth a lot more money than it is now.

"The first cabin was built for a man working on some road construction near the property," Melvin said. "The idea caught on and they built 18 cabins."

The cabins didn't even have beds for the first year but, after visitors complained about the hard ground, the family decided to put beds in each cabin. None of the cabins had running water for the first 25 years of operations. There was one cabin used as a cookhouse for people who wanted to make their own food. It contained two refrigerators and two stoves. 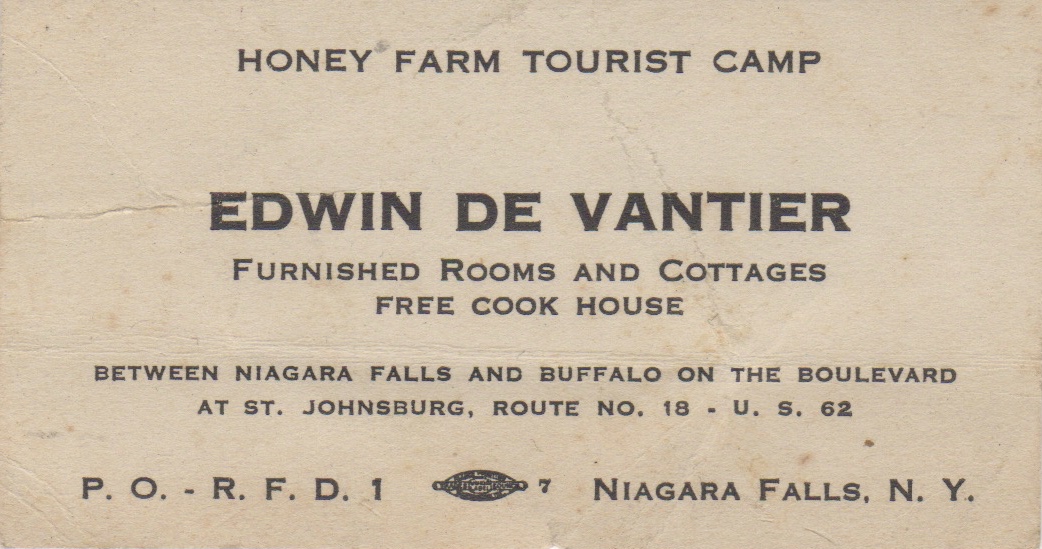 This was the business card given to customers or visitors to promote their business and encourage them to come again.

The family brought water to the campsite and kept it in a cistern that was available to all campers or cabin dwellers. In the winter, it was kept in the milk house.

The campsite and stand gained a boost in customers when the Bell Aircraft Plant opened in Wheatfield in 1941 and during the Niagara Power Project. Some of the cabins were even set aside for those workers. There were times when all of the cabins were occupied, so Lily opened her door to provide for an additional 20 people at a time.

Other popular tourist attractions at the time, such as Niagara Falls and the Maid of the Mist, gave informational pamphlets to Edwin to put in each cabin for the customers.

Edwin and Lily took care of all the maintenance and cleaning by themselves without hiring any help. After many years, the amount of work took a toll on their bodies and lives.

"Eventually it got to be too much for my mother with the young kids and little help from family members," Melvin said. "They had to close and focus on their health."

After 36 years of service, Edwin and Lily had to make the difficult decision to close their business.

Today, little evidence of the historical landmark remains. Most of the cabins have been taken down, destroyed, or repurposed. Only the cookhouse remains at the location. The roadside stand is still present on Niagara Falls Boulevard today, but the signs have been removed.

After almost 100 years, the time remaining for the stand is limited. If the roadwork plans get carried out, the building will be removed. 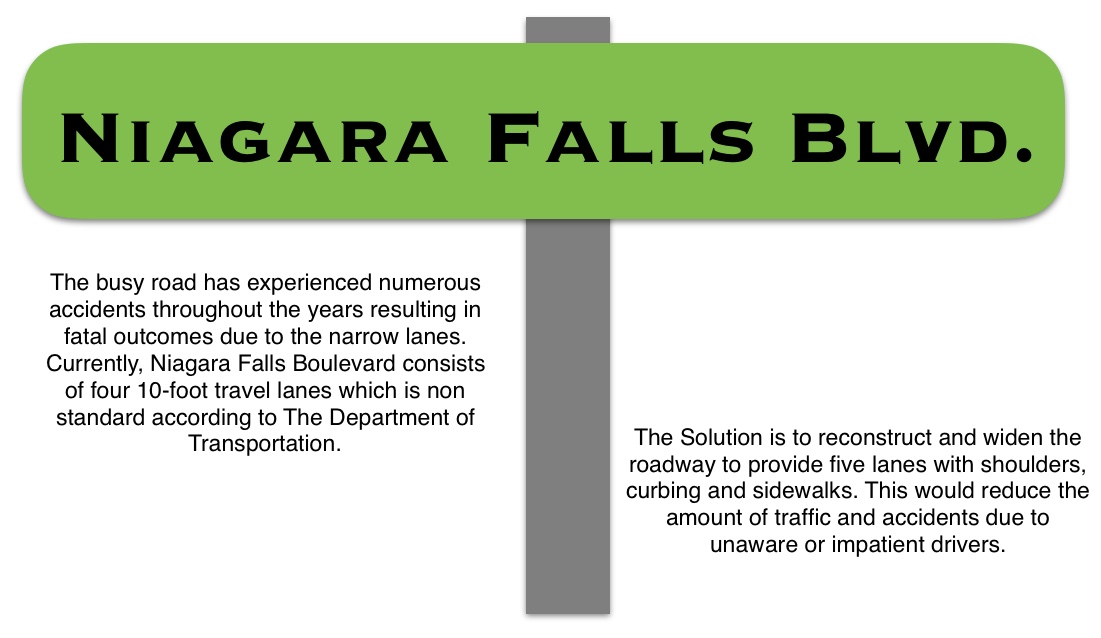 The funds requested for the project have not been attained yet, so the building will remain in its place until then.

"Not many people who remember the stand are still alive today," Melvin said.

It has almost been 100 years since the stand and cabins have been around. For now, the memories and the stand by the road are all that remains in the once-popular tourist center. 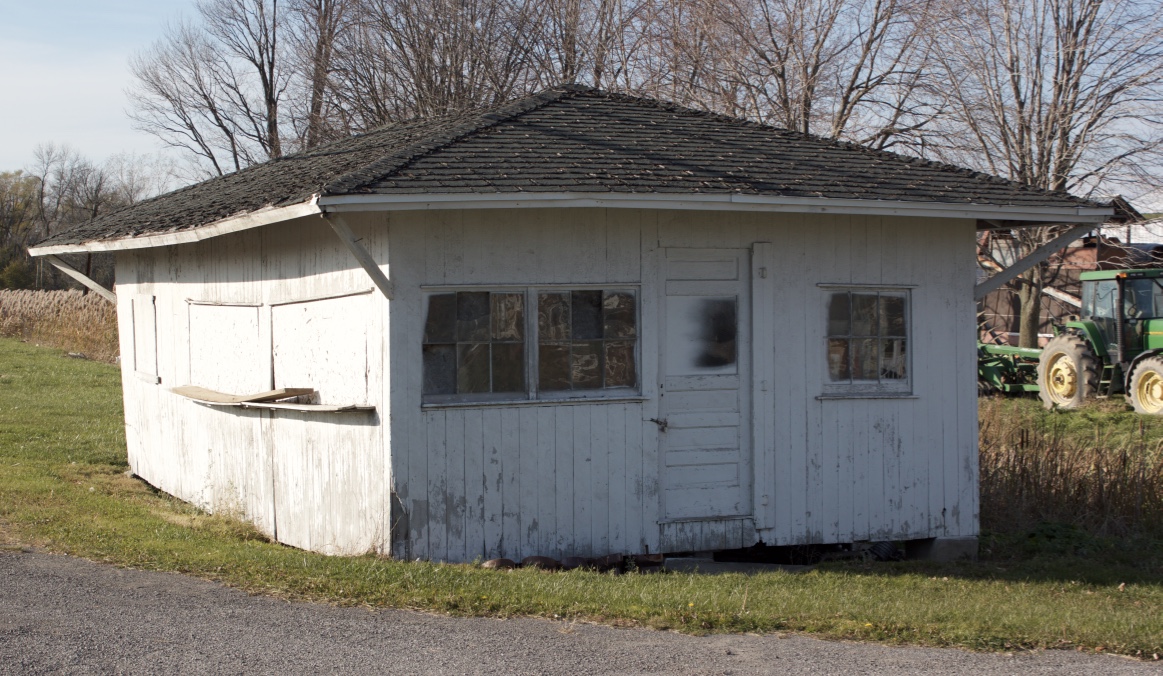 Shown in this image is what the abandoned roadside stand looks like today.

Editor's Note: The portion of Niagara Falls Boulevard where the stand is located has not been scheduled on the 2021 Transportation Improvement Program list for the Greater Buffalo Niagara Regional Transportation Council.