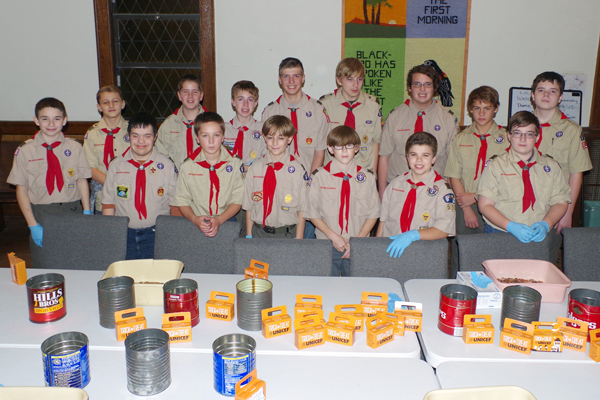 Boy Scout Troop 510 met at Trinity United Methodist Church Nov 10 to take on the task of sorting coinage collected as part of the 2016 Trick-or-Treat for UNICEF fundraiser. (Photo by Larry Austin)

For the 38th year, Grand Island Boy Scouts have served as money sorters in the Trick-or-Treat for UNICEF fundraiser that takes place each Halloween on the Island.

Armed with the little orange boxes of money and all of the required supplies, Scouts took approximately an hour of time to sort pennies, nickels, dimes and quarters into the same metal coffee cans that have been used since 1978. They're stored in the basement of Hal Pierce, longtime Scout representative for the money sorting.

"They come up every November," Pierce said of the cans. He said the work would take about an hour.

Those who took part in the money sorting Nov. 10 at Trinity were:

•1997 through 2008, Boy Scout Troop 254 at Kaegebein School and the former Grand Island Nike Base