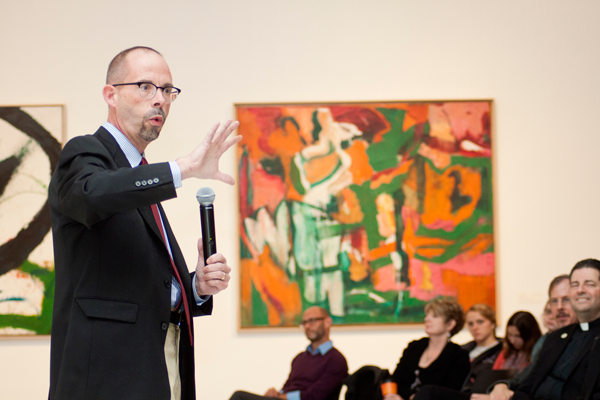 One of the world's foremost scholars on the Vatican and Catholic Church delivered an address at Niagara University on Nov. 9 focused on Pope Francis' fundamental inclination to mercy and servant-leadership.

Allen's talk was the latest installment in Niagara University's Henry and Grace McNulty Lecture Series on Religion in the Modern World.

Currently the editor of Crux, Allen has written articles for The Boston Globe, The New York Times, CNN, NPR, The Tablet, Jesus, Second Opinion, The Nation, the Miami Herald, Die Furche, and the Irish Examiner. He is a senior Vatican analyst for CNN, and was a correspondent for the National Catholic Reporter for 16 years.

Among Allen's 10 published books are "Opus Dei: An Objective Look Behind the Myths and Reality of the Most Controversial Force in the Catholic Church," and two about Pope Benedict XVI. His most recent is "The Francis Miracle: Inside the Transformation of the Pope and the Church."

On Wednesday night, Allen drew on his formidable experience with the papacy to explain the popularity of Pope Francis as well as the pontiff's ability to "launch a remarkable revolution in Catholicism" since taking office three years ago.

Allen pointed out Pope Francis is by far the most popular religious leader on the planet and one of the most popular public figures of any sort. The Argentinian prelate has amassed nearly 30 million followers on Twitter and graced the cover of virtually every major magazine in the world.

On the very day that one of the most contentious presidential elections in American history was decided, Allen stated, "In every corner of the world where public opinion can be scientifically measured, this pope has approval ratings that politicians and celebrities would sacrifice their children to pagan gods to attain."

The most recent Gallup poll showed more than 79 percent of Americans generally have a positive opinion of Pope Francis. That figure balloons to 89 percent among American Catholics.

"If you don't think Donald Trump or Hilary Clinton would've taken that favorability rating and run screaming into the night, you were not paying attention to the dynamics of the 2016 campaign," Allen remarked during his 55-minute oration.

So what is it about Pope Francis that has stirred the interest and the imagination of so many people?

Allen attributed it to the pontiff possessing the world's leading supply of general moral authority. He said the "Pope Francis Revolution" is comprised of three pillars - three core ideas that underlie the whirlwind of activity that the public sees from him on a continual basis. Allen alliteratively described the pillars as a passion for the peripheries; a seriousness about service; and a mania for mercy.

The Catholic principle in the Gospel that the last shall be first, in particular, has informed the manner in which Pope Francis has managed his papacy. With him, Allen said, that philosophy is not pious rhetoric, but an actual program of governance.

Allen referenced the well-known moment when Pope Francis stopped his cavalcade in St. Peter's Square to kiss and bless a man with a genetic skin disorder that left his body covered in boils. The moment was much more than a photo opportunity for the pontiff, Allen posited; rather, it was another example of Pope Francis always having a strategy for the choices he makes.

"Beneath that humble, simple exterior lies the mind of a brilliant Jesuit politician," Allen said. "He is aware that everything he does sets a tone for what leadership in the church looks like. And those sorts of moments are intended to drive home the notion that leadership is supposed to be about service."

As remarkable and authentic that Pope Francis' servant-leadership has proven to be, Allen warned against relying entirely on the head of the Roman Catholic Church to assuage the world's issues. All of God's people, he noted, are capable of being agents of change.

"If Catholics have an Achilles heel, it's that we believe that the popes and bishops are the cause of and solution to all of our problems," Allen said. "Ladies and gentlemen, I am here to tell you that that is not how change happens. It happens because creative people in the church realize when a moment is upon them, and they stand up and respond to it.

The McNulty Lecture Series is devoted to questions of faith in the contemporary world, especially the topics of social justice and interreligious dialogue. The series was established by the late Rev. Thomas P. McGourty, C.M., a professor of religious studies at NU, in memory of his late aunt and uncle.