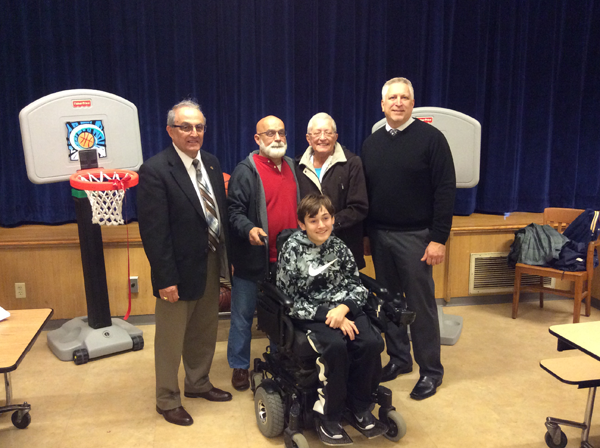 Kale Shiesley (center) poses for a photo with his grandparents and local officials at the new basketball court at Drake Elementary School named in his honor. Back row, from left, are, City of North Tonawanda Mayor Arthur G. Pappas, Kale's grandparents John and Terri Litten and Superintendent of Schools Greg Woytila.

Initial planning for the project began more than five years ago by the Friends of Drake School, a group of Parent Teacher Association members concerned with the school's deteriorating playground and basketball court.

Fundraising events were held by John and Terri Litten of J L Auto, whose grandson, Kale Shiesley, attended Drake Elementary. Kale suffers from spinal muscular atrophy, a progressive disease that took away his ability to walk. The court was named "Kale's Court" in his honor.

"Even though Kale Shiesley hasn't been a student at Drake for four years, the Friends of Drake felt it was necessary to honor John Litten and his family for working so hard in their fundraising efforts to make this playground a reality," said Tammy Riley, member of Friends of Drake School. "We want to thank mayor Pappas and Sen. Robert Ortt for coming together to assist in having the old basketball court removed and the new one installed."

"I was honored to help out when approached for this project," Pappas said. "Many children will play on this court, but there is a little boy that will never have the chance. ... The court is adorned with Kale's name due to his courage and perseverance in the face of such a debilitating disease. The Friends of Drake School, the Litten family, as well as all the others that volunteered their time and energy, should all be commended for their work."

Members of a local company, Lafarge, contributed a donation of asphalt for the project. Additional help by Pappas and Department of Public Works Superintendent Brad Rowles came in the form of equipment and labor used to complete the paving of the court. With painting and striping of the court recently completed, the court is now open to the students of Drake School, as well as the children and adults of the surrounding community.