Mamie Simonson was instrumental in the renaming of the parkway.

Mamie was born Dec. 30, 1928, in Niagara Falls, New York, the daughter of Norman and Eva (Wassaf) Maroon. She was the sixth of seven children. Both of her parents immigrated to the United States from Lebanon early in the last century.

Her dream of becoming a photographer began at age 14 while a student at North Junior High School. At 16, she worked after school as an apprentice at a local portrait studio. At graduation from Niagara Falls High School in 1946, she was awarded a Zonta Club scholarship to study photography at the Rochester Institute of Technology, where she met her future husband, Marvin "Si" Simonson, a fellow student from Duluth, Minnesota, and military veteran who was also studying photography.

Mamie always joked that they had met in a photo darkroom. They both graduated in 1948. In November 1949, they were married at our Lady of Lebanon Church in Niagara Falls.

They started their first portrait studio at 547 Main St., in Niagara Falls. In 1955, they moved to Whirlpool Street, but that home was taken four years later to make room for the parkway. The studio was relocated to Lewiston in 1961. She and Si worked side-by-side during their entire 58 years in business, retiring in 2007. They received the Civic Pride Award from the Lewiston Chamber of Commerce in 2004.

Mamie and Si provided their thousands of loyal customers with dependable service, and took pride in helping to create family heirlooms that will be cherished for generations to come. They photographed over 1,000 weddings.

Known for her expressive personality and wide smile, Mamie enjoyed entertaining children in the studio with her large collection of toys. She befriended a wide range of people from every walk of life and felt blessed and grateful for her many dear friends. She was recognized for her compassion, charitable works, and her ability to strike up a conversation with anyone.

Just before she died, Mamie said, "I want my family and dear friends to know that I had a perfect life with God's blessings."

Mamie was active in community affairs, and one of her projects involved recruiting and organizing volunteers to collect money for the local soup kitchens at the Artpark "Tuesday in the Park" concerts. She and her fellow volunteers raised over $100,000.

More recently, Mamie was involved in a one-woman campaign to change the name of the Robert Moses Parkway to make it more visitor-friendly. On June 9, after months of letter writing to local and state government officials, Gov. Andrew Cuomo came to Niagara Falls to make the announcement that the name would be changed to the Niagara Scenic Parkway. He introduced Mamie on stage to be part of the unveiling of the new parkway sign and hugged and praised her for her persistent efforts, calling her a "champion of change."

Congressman Brian Higgins also worked with her to successfully convince the New York Power Authority to contribute $2 million toward the new redesign of the parkway.

Mamie was a member of St. Peter's Roman Catholic Church in Lewiston, a charter member of the Lewiston Beautification Committee, and a volunteer for several area organizations, including the Friends of the Lewiston Library.

In the ultimate act of selflessness, Mamie donated her body to science to help train the next generation of doctors.

Private services will be held at the convenience of the family. Flowers are gratefully declined. Donations may be made to the Historical Association of Lewiston (monuments maintenance fund), PO Box 43, Lewiston, NY 14092, or to an organization of choice. 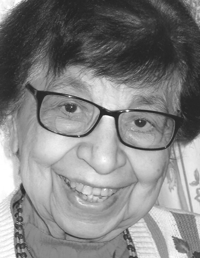