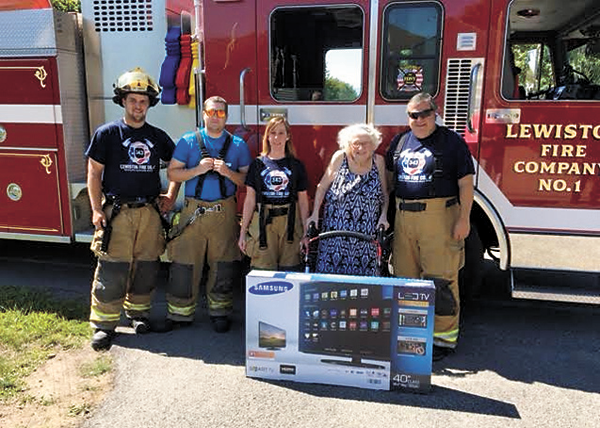 The staffers of Lewiston No. 1 Volunteer Fire Co. report experiencing a rather unique and heartwarming conclusion to their annual fundraiser.

Each year, Lewiston No. 1 sends letters to its fire district residents, asking the community to assist the fire company with funding needs. Lewiston No. 1 is comprised of 100 percent volunteers and provides emergency medical services to the community. Funding for EMS is solely from donations, while the fire protection is contracted through both the Village and Town of Lewiston.

At the conclusion of the fundraiser, all those who returned a donation or a response card were entered into a drawing to win a 40-inch Samsung HD TV. The drawing was held Aug. 31 at the firehall, and Lewiston resident Rita Oliver was the recipient.

"She was very excited to win, because it enables her to not have to change rooms to watch TV. To show her appreciation, Rita also gave Lewiston 1 members a cake," said Matt Grainge, Lewiston No. 1 president.

He reported that, upon delivering Mrs. Oliver her prize, the resident had a story to tell the firefighters.

"Rita reminded Lewiston 1 responders that, approximately two years ago, her husband suffered a cardiac arrest in which Lewiston 1 responded," Grainge said. "Rita spoke about how members from the fire company not only responded quickly to the medical emergency, but continued to say that two members stayed with her to comfort her until her daughter arrived.

Grainge added, "A very heartfelt 'Thank you' from Lewiston Fire Co. No. 1 to all in the community for their overwhelming and generous response."

In the photo, Mrs. Oliver, shown with her new TV, joins with Lewiston No. 1 Chief John Penzotti and fire company members. (Submitted photo)