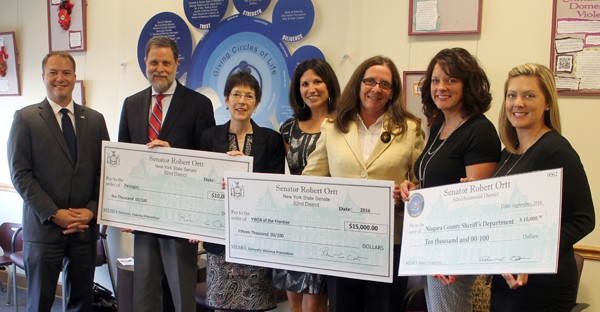 Ortt delivers a total of $35,000 to help victims of domestic violence

As part of this year's state budget, Sen. Rob Ortt, R-C-I-North Tonawanda, secured a total of $35,000 to help victims of domestic violence and sexual assault in Niagara County. On Thursday, Ortt presented that funding with ceremonial checks to the Niagara County Sheriff's Office and two nonprofits: Family & Children's Service of Niagara and the YWCA of the Niagara Frontier.

"Domestic violence and sexual assault impact every demographic," Ortt said. "It can happen to anyone of any age, gender or race, and often leaves the victim with mental, physical and emotional scars. It's vital that we have wrap-around services available to make sure victims have the help they need. Ultimately, this funding will further community outreach, help to protect our vulnerable citizens, and help to put an end to violence in the home and community."

The NCSO received $10,000 in state funding to provide mandated domestic violence training to all its sworn officers. Members of the Niagara County District Attorney's Office and certified trainers will provide approximately 110 officers with updated policies, procedures and legal information related to domestic violence.

Family & Children's Service of Niagara also received $10,000. The money will go toward its Passage House Shelter, a 15-bed emergency shelter in Niagara Falls for domestic violence victims and their children. According to Family & Children's, the amount of victims throughout the county in need of help has increased over the past year. The funding secured by Ortt will support expenses related to the influx of individuals, including counseling services for survivors and their offspring, enhancing child enrichment programming, and around-the-clock staff coverage.