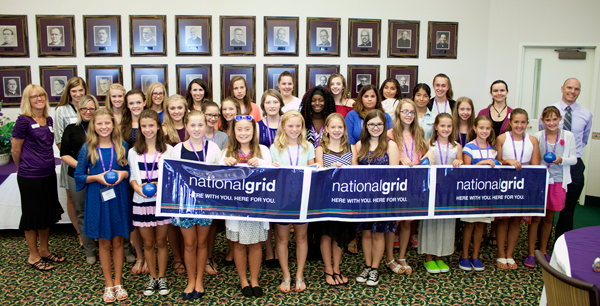 Pictured with Dr. Chandra Foote, far left, dean of Niagara University's College of Education, and Daniel Keating, far right, manager of customer and community management for National Grid, are the participants of this year's young women's STEM camp at NU.

NU's 10th year of STEM training for teachers and children

When the Rev. James J. Maher, C.M., was invested as Niagara University's 26th president, he stated in his inaugural address the Catholic and Vincentian institution would become an even greater regional partner by forging a "distinctive role in STEM education, computer science, logistics and other fields that support the advancement of industry in our region."

Opening the B. Thomas Golisano Center for Integrated Sciences in October 2013 was a monumental, $33 million step in that direction for Niagara University.

Yet, Maher and Niagara administrators are also intent on advancing the delivery of STEM - science, technology, engineering and mathematics - education to the youngest members of the community, not only those students already enrolled at the university.

Their reasoning is two-fold:

•New York Gov. Andrew Cuomo and the Western New York Regional Economic Development Council have prioritized the development of Buffalo-Niagara's health and life sciences industry. The university, as part of its educational and social mission, is more closely aligning its strategic vision with the priorities of the region.

•Data from the U.S. Bureau of Labor Statistics shows employment in occupations related to STEM is projected to grow to more than 9 million between 2012-22. That's an increase of about 1 million jobs over 2012 employment levels. President Barack Obama has repeatedly stressed the importance of STEM education, saying, "Leadership tomorrow depends on how we educate our students today - especially in science, technology, engineering and math."

"The future of the economy is in STEM," echoed James Brown, the executive director of the STEM Education Coalition in Washington, D.C. "That's where the jobs of tomorrow will be."

For the past decade, Niagara's College of Education has sought to provide access to quality science, technology, engineering and math education for children - especially girls and low-income youths, who, studies show, traditionally enter the STEM fields at the lowest rates. NU also, over the past 10 years, has presented STEM training for teachers and degree candidates, cementing its status as a leader in the field.

This summer, the college's Institute of Applied Learning upped the ante even further, offering three separate summer camps intended to engage young people in the practical application of STEM. The campers participated in activities related to engineering, coding, robotics and computer-aided design and drafting, among other applications.

The weeklong camps, sponsored by National Grid, were open to children ages 5-7, children in grades 3-8, and a young women's camp for girls in grades 6-9. A total of 162 children participated.

"As educators, it has become increasingly important for us to enlighten young people on the opportunities that exist in today's workforce in science, technology, engineering and mathematics," Maher said. "The shift toward globalization and a knowledge-based economy makes these skills pervasive in virtually every aspect of daily life."

As part of the young women's camp program, the 32 participants heard from three local businesswomen and an NU chemistry professor on their experiences with STEM and the diversity of opportunities that a degree in the field affords.

Jessica Chapman, director of maintenance services at Calspan, talked about the importance of shadowing and internships. Sonya Pegler, a manufacturing manager for Saint-Gobain, encouraged the girls to link their STEM interests with a burgeoning career field.

So how does a young person decide what he or she really wants to do?

Dr. Robyn Goacher, an assistant professor of chemistry at NU, told the girls that, when she was in middle school, she found herself setting goals based upon the opinions of others. As she matured, she realized she was especially interested in the sciences, at which time she really began to pursueher passion.

"I was accomplishing things, because it was the next thing to do, and I hadn't really looked inwards to see if that was what I really wanted," explained Goacher, who said that about two-thirds of her chemistry students are female.

"What helped me was that I would find anyone who was doing a job that I might even remotely find interesting, and ask them why they were doing it," Goacher said. "Once you find the interest and environment that fits you, you have to keep directing your efforts to realize those dreams."

Each of Niagara's STEM camps focused specifically on energy and advanced manufacturing, both in content and in college and career readiness activities. Emphasis in the young women's camp was also placed on personal development, etiquette and leadership.

Lisa Montesano, lead environmental engineer for National Grid, advised the campers against underestimating the importance of these skills, as well as the value of a liberal arts-based education from a comprehensive institution like Niagara.

"Being able to communicate, whether that be verbally or written, is extremely important," she said. "I work with government agencies, industrial representatives, academics and residential customers. I need to be able to communicate effectively with many different types of constituents."

In July 2013, National Grid, in partnership with NU and the Niagara Falls City School District, began providing funding for a graduate-level STEM and advance manufacturing professional development courses for 45 teachers from the school district. With that training completed, NU's complementary STEM summer camps are intended to provide the next generation with the tools and resources to be prepared for the future job market.

All activities during the camps are aligned to the New York State Learning, Common Core, College and Career Readiness Standards, and Next Generation Science standards.

"Niagara University has done a spectacular job with the STEM program. National Grid is proud to sponsor these programs," said Dan Keating, jurisdictional manager for National Grid. "The camp facilitators and speakers put great smiles on the face of each camper. The campers truly enjoyed their time learning about the STEM field."

Founded by the Vincentian community in 1856, NU is a comprehensive institution, blending the best of a liberal arts and professional education, grounded in values-based Catholic tradition. Its colleges of Arts and Sciences, Business Administration, Education and Hospitality and Tourism Management offer programs at the baccalaureate, master's and doctoral level.

As the first Vincentian university established in the U.S., NU prepares students for personal and professional success while emphasizing service to the community in honor of St. Vincent de Paul. Its institutional commitment to service learning has led to its inclusion on the President's Honor Roll for Community Service every year since its inception in 2006, and its recognition with the Carnegie Foundation's Classification for Community Engagement.