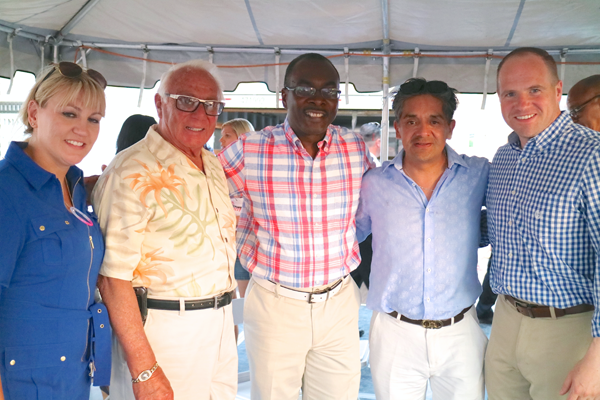 On Monday, July 4, America recognized its 240th birthday. Independence Day is a celebration in the United States to commemorate the adoption of the Declaration of Independence, which was signed on July 4, 1776, by the Continental Congress. The document declared the 13 American colonies regarded themselves as a new nation and were no longer a part of the British Empire.

Only two people actually signed the Declaration of Independence on July 4: John Hancock and Charles Thomson. Most of the rest signed Aug. 2, 1776, but the last signature was not added until five years later.

In 1777, on its first anniversary, 13 gunshots were fired in salute on July 4 in Bristol, Rhode Island. Philadelphia celebrated the first anniversary in grand fashion with a 13-gun salute, parades and fireworks, while ships were decked out in red, white and blue.

Fireworks are a big part of July 4 celebrations. According to scholars, they were originally developed in the second century B.C. in China and, in 2000, $128.9 million worth of fireworks were imported from China.

For over 25 years, the Buffalo Bisons have celebrated Independence Day on July 3 with the KeyBank celebration of a Bisons' game, followed by a tremendous Buffalo Philharmonic Orchestra concert and tribute to the men and women who currently serve in the Armed Forces or are veterans. It is so heartwarming to hear the orchestra play each branch's song while the orchestra asks for those who served in that branch to stand. The audience fills the air with loud applause in appreciation for their service. The evening is capped by an elaborate fireworks display.

On July 4, Grand Island becomes an Americana town as it begins the day with a road race and a long and colorful parade down Grand Island Boulevard, which is watched by thousands. It is such a tradition that families will place their chairs or canopy tents along the route a few days before the parade.

After the parade, it seems as if the entire town attends the annual fundraiser picnic for the DeGlopper VFW Post, which features live music, great food, food trucks and a beer tent.

In downtown Buffalo, on the newly refurbished waterfront, fireworks have filled the sky at Canalside for the past eight years. This wonderful piece of public space that sits adjacent to the waterfront's first tenant in nearly 40 years ago, the Buffalo and Erie Country Naval & Military Park, has a wonderful history of celebrations. Back when the Erie Canal opened in 1825, a line of unbroken cannon shots was fired from here to New York City.

Today, Canalside, which celebrates a rebirth of the site of the Western Terminus of the Erie Canal, has become the place for the community to gather on July 4 to watch fireworks and celebrate our independence as a country. Spectra Venue Management, which manages the events at Canalside and Old Falls Street in Niagara Falls, has done a spectacular job in making it an all-day event with live music and activities for families.

The draw is the elaborate fireworks show. Prior to Canalside, the city's July 4 celebration was done at Delaware Park. The sponsor of the fireworks for the past 20 years has been Russell J. Salvatore, the 83-years-young owner of Russell's Steaks Chops & More, and Salvatore's Grand Hotel on Transit Road in Williamsville. Prior to that, he founded Salvatore's Italian Gardens, which is now run by his son and grandsons. 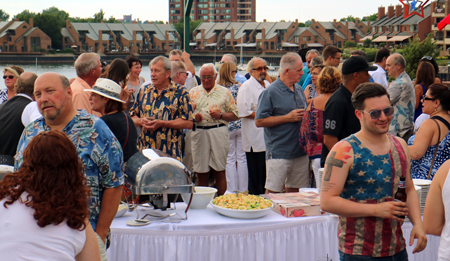 Russell J. Salvatore stands amidst partygoers at the July 4 event he sponsored.

"The 4th of July is for America to celebrate," Salvatore said as he stood among 250 of his closest friends at a private party he hosted on the roof of Templeton Landing, a short distance from Canalside. From there, he and his guests had a tremendous view of the show.

For Salvatore, one of the most generous and entrepreneurial business leaders in WNY, sponsoring the city's fireworks shows is not just about writing a check to cover the costs. He sits with the owner of the company and goes over the entire show to ensure it is spectacular for everyone watching it. He is also one of the most patriotic people I know, and he goes out of his way to do anything to help our veterans. To that end, he creates a soundtrack of spectacular patriotic music, which the fireworks are choreographed to.

Salvatore also created the amazing Patriot's and Hero's Park in front of his restaurant as a tribute to veterans and America.

If that weren't enough, he purchased 30 minutes of time on a local radio station so people who couldn't leave their homes, those on their boats watching the fireworks or those at other shows, could hear his music.

The highlight of the July 4 evening for Russell each year is when he goes on stage at Canalside and talks to a crowd of over 20,000 people. "I tell them that they do not know how great I feel inside, because of the wonderful fireworks show they will see that night," he said. "I love walking through the crowd and talking to families from every section of the city. It brings tears to my eyes when they say 'Thank you' for making this such a special day for them."

There was a glitch in the start of this year's show, because of an electrical problem, and also some of the shells never went off. The following day, Spectra Venue Management representatives and the fireworks owner met with Salvatore and Mark Jerge, his longtime general manager. They offered him a free fireworks show for the public after the free Thursday night BPO concert, "A Tribute to David Bowie," on July 28.

"That was very nice of them," Salvatore said.

"I have been involved with the fireworks show with Russ for 20 years, and I intend to do it every year the Lord lets me," Jerge said. "While everyone looks up to the sky admiring the fireworks, I am always looking at the people and their smiles. That makes it all worthwhile."

Charlie Ciotta, Salvatore's Conocenti ambassador, added, "Russ embodies the pyrotechnics-loving child in all of us." 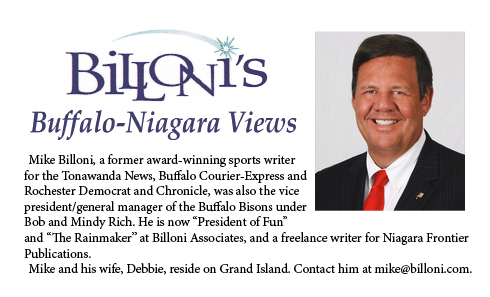