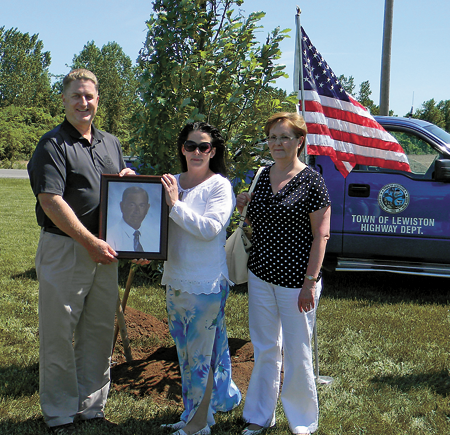 Town of Lewiston Supervisor Steve Broderick receives a framed picture of the late Doug Janese from his daughter, Diana J. Regan, and his wife, Sue.

The Town of Lewiston held a celebration of life memorial service Wednesday in memory of Highway Superintendent Doug Janese, who passed away Feb. 16 following a battle with cancer.

Town officials were joined by new Highway Superintendent Dave Trane, town highway employees, highway superintendents from neighboring towns, local officials and members of the Janese family at the event, which celebrated Janese's life with the planting of an oak tree at the Highway Department garage on Swann Road.

"I just want to thank everyone for coming. I really didn't get to work with Doug, but I wanted to extend my deepest condolences to his family. This is something nice that we're doing for the family," Town of Lewiston Supervisor Steve Broderick said.

"We're very appreciative that Sue (Janese's wife) and her family were able to join us for this ceremony," said Town of Lewiston Councilman Bill Geiben who officiated the program. "Sue selected the mighty oak in honor of Doug. We jokingly talked of how we should have had a Douglas fir here, but the oak will stand tall for many years to come.

"Doug Janese, Lewiston's man in the blue truck, served as Lewiston Highway superintendent for six years," Geiben continued. "Doug took his job seriously, and cared deeply for the people of Lewiston. He believed that people of Lewiston deserved and expected excellent service, which Doug and his crew provided. Doug took the time and effort to connect with the residents who had concerns and issues."

Janese took over as superintendent of highways on June 1, 2010, during the Steve Reiter administration. That followed his earlier employment with Great Lakes Carbon, as a member of Carpenter's Local 280 and as a property manager.

The Town Board said Janese served with dedication and passion.

"We selected today for the remembrance ceremony and the dedication of the tree because it was his sixth anniversary of coming to the Town of Lewiston as superintendent of highways," Geiben said.

He recalled Janese's dedication to the town, stating, "Doug's blue truck could be seen in all parts of Lewiston, from Sanborn to the village. Often, Doug would pull over to take a phone call or to do paperwork."

Recalling his battle with cancer last fall, Geiben continued, "Doug was a private man and did not let others know he was ill. Through the fall election campaign, Doug kept going. He made strategy meetings and continued to campaign door to door. The election was close, but Doug maintained a positive attitude and smiled brightly when he was declared the winner."

Geiben then offered his appreciation to Jeff Cosgrove, who served as acting superintendent of highways until the recent appointment of Trane.

"He did an admirable job, and Doug would be certainly proud of his accomplishments in the short term," Geiben said.

As the Janese family gathered with Lewiston officials at the tree-planting ceremony, Janese's wife, Sue, offered words of thanks for the kind gestures.

"Thank you everyone for coming here today, to take part in this living tribute to my husband Doug," she said. "I think it will help all of us stay connected to our memories of him.

"Doug was a very proud man - proud of the work that his men did, the men in the Highway (Department) and the great job that they did. He enjoyed mentoring the young men that were here in the summer, and I think his favorite part of all was helping the residents of the town."

"I hope that his legacy will flourish," she said. "I know that Doug felt he lived a full life, with no regrets. But he did things his way. Whether it was supervising things, the budget, politics, his way was always a little bit different."

"Whenever you see this tree, please remember the best times you had with Doug," Sue said to a round of applause.

The program concluded with a presentation. Sue and the couple's daughter, Diana J. Regan, presented a portrait of the departed highway superintendent to Broderick and the town officials. It will hang in Town Hall.

"Please accept this in memory of his service to the town," Diana said. 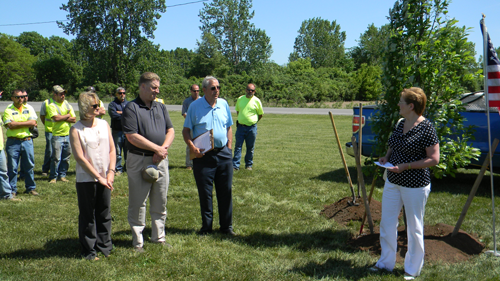