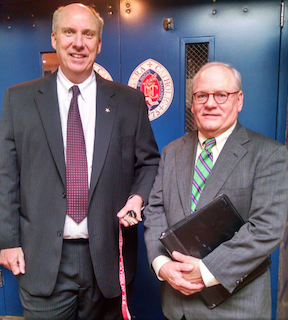 Changing of the guard at Niagara Catholic

Niagara Catholic Jr./Sr. High School President/Principal Ronald Buggs is retiring from his post. Robert M. Cluckey will take over effective July 11. Cluckey has served as the director of special programs at Niagara Orleans Board of Cooperative Educational Services for the past 12 years.

Cluckey began his career as a teacher and later as a school counselor. In 1989, he started his administrative career as an assistant principal at Orchard Park Central School District. He then became principal at Holland CSD. Cluckey was later appointed director of pupil personnel at Frontier CSD before his tenure at Orleans Niagara BOCES.

Cluckey attended Mother of Divine Grace Grammar School and Bishop Neumann High School. He earned his bachelor's degree from the State University College at Buffalo, a master's degree from St. Bonaventure University and performed his doctoral work at the University at Buffalo. He has memberships in numerous professional and civic organizations, including Association for Supervision and Curriculum Development, Phi Delta Kappa, the Boys and Girls Club, Parish Council and Council for Exceptional Children. He also serves on the board of Niagara County's juvenile justice task force, New York Success and the re-entry task force.

Judi Nolan Powell, chairwoman of Niagara Catholic's board of trustees, said, "We are pleased to welcome Bob Cluckey to our team as Niagara Catholic's new principal/president. Bob's many experiences in educational leadership at all levels give us the confidence that Niagara Catholic will continue to be in good hands. His passion for excellence and commitment to the values imbedded in Catholic education will serve us well in the future. Bob's vast network of contacts in education across our Niagara County market is an added benefit for us.

As we welcome Bob to the Niagara Catholic family, we also want to express our sincere gratitude to Ron Buggs for his passion and accomplishments at the helm of Niagara Catholic these past three years. Ron leaves a legacy of excellence in leadership at Niagara Catholic and we wish him the very best in his well-deserved retirement."

Cluckey said, "I am absolutely thrilled for the opportunity to serve the students and school community of Niagara Catholic. I look forward to contributing to an outstanding legacy of high expectations, significant results and positive partnerships. Niagara Catholic is a special place and I am honored to have been selected for this leadership position."