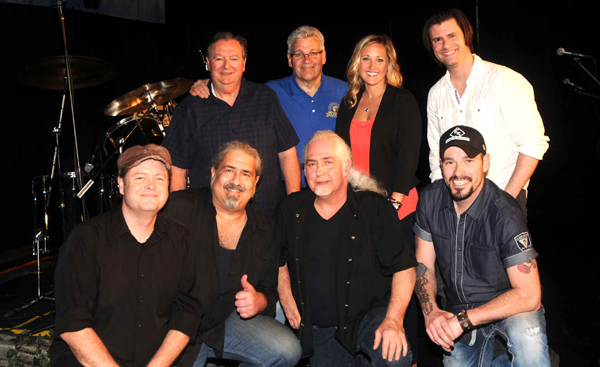 Members of JB Aaron and the Brethren pose for a photo with "Search for the Sound of Smokin Joe's" judge and Town of Niagara Supervisor Lee S. Wallace (back row, left); master of ceremonies Bob Koshinski and judge Katie Morse, a news anchor/reporter at WKBW-TV.

JB Aaron and the Brethren won the top prize of $750 and the right to be Smokin Joe's Native Center's house band during the "Search for the Sound of Smokin Joe's" event in downtown Niagara Falls.

Six bands competed for the title, including The Heenan Brothers, North of South, The Hootz, Alison Pipitone Band, 2nd Time Around and JB Aaron.

In the end, JB Aaron and the Brethren came in first. The Hootz came in second, earning $500, and the Alison Pipitone Band finished third, claiming $250.

A celebrity panel with musical backgrounds helped judge the event. Judges included Katie Morse, a news anchor/reporter at WKBW-TV and lifelong country music fan; Dave Jickster, the promotion director/ on-air personality at 97 Rock and fan of all types of music; and Town of Niagara Supervisor Lee Wallace, who has been a musician most of his life and a member of several bands throughout his music career.

Overall, an estimated crowd of 100 loyal country music fans were on hand to applaud for their favorite bands, while enjoying a selection of chicken wings, pizza, beer, wine and soft drinks. Master of Ceremonies Bob Koshinski also distributed free giveaway prizes during the night, including T-shirts, hats, Frisbees and mugs.