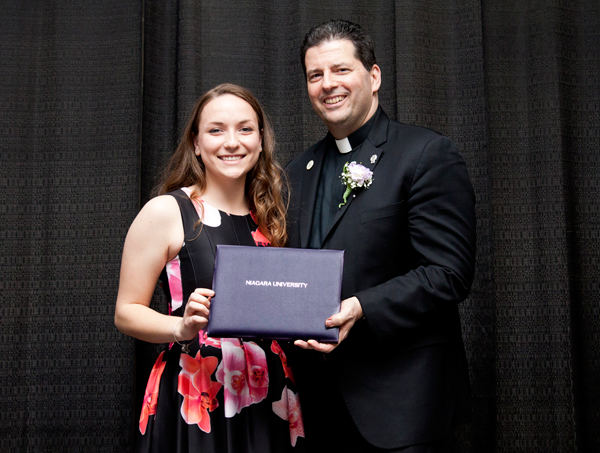 Megan Rogers, a sophomore business major at Niagara University, has been named a 2016 Newman Civic Fellow by Campus Compact for demonstrating outstanding leadership and civic engagement. The Lewiston native is among 218 students in the country to receive the award.

Campus Compact is a national coalition of almost 1,100 college and university presidents who are committed to fulfilling the civic purposes of higher education.

"Megan's passion and drive come from her desire to simply make someone else's day a little better, acknowledging that it helps her to grow as a person as well," Maher said. "Anyone who has worked closely with her will attest to her strong initiative, positive attitude and innovative sprit. Megan's Vincentian method to serving others provides a true example of what a leader should be; she is a great asset to both Niagara University and the global community."

Rogers's history of volunteering to help others dates back to high school, when she was a Key Club member who assisted several organizations, including Habitat for Humanity.

When Rogers arrived at NU, she joined the Business and Organizational Leadership Development club because she saw the opportunity to apply what she was learning in class to a real-life problem, namely that 1.5 billion people worldwide are infected with diseases transmitted through contaminated soil (according to the World Health Organization). A key initiative of the BOLD club is the Sandal Falls project, which collects and cleans gently used sandals from the Cave of the Winds to send to areas around the world in need of footwear.

Rogers has assumed a leadership role with the club - she was unanimously elected president - and actively recruits volunteers, maintains inventory and sets up service projects. She is also working with NU faculty to create a travel abroad course in partnership with Soles4Souls to allow BOLD members and other business students to travel to different areas to distribute footwear, beginning as early as next year.

Last week, Rogers led a team of students to load an 18-wheeler with approximately 90,000 sandals that will be distributed across the Soles4Souls worldwide network and on to the feet of those who have no footwear.

"Working on the Sandal Falls project has been an amazing experience," Rogers said. "Knowing that we can impact even one person's life with a simple pair of shoes makes all the time and effort put in worth it. It is a blessing to have this opportunity to volunteer in making a difference and give someone a new chance at a better, healthier life."

"Megan is invested in this idea, because she wants students to see what a difference the Sandal Falls project is making in the world, and the importance of getting footwear out to areas in need," noted Dr. David Taylor, director of the Levesque Institute, which oversees Sandal Falls. "She also hopes to incorporate more business concepts into the club to show her fellow members how they can make an even greater civic footprint through business and leadership skills."

The Newman Civic Fellows award honors inspiring college student leaders who have demonstrated an investment in finding solutions for challenges facing communities throughout the country. Through service, research and advocacy, Newman Civic Fellows are making the most of their college experiences to better understand themselves, the root causes of social issues, and effective mechanisms for creating lasting change.

Previous Niagara students who have been named Newman Civic Fellows include James Mackey, '16, for his leadership at the St. Vincent de Paul soup kitchen in Niagara Falls, and Crystal Lorenzo, '15, for her role in creating the NU student chapter of To Write Love on Her Arms.

"We are fortunate to have the opportunity to celebrate such an extraordinary group of students," Campus Compact president Andrew Seligsohn said. "We are seeing a resurgence in student interest in acting to create lasting social change, and this year's Newman Civic Fellows exemplify that commitment."

Newman Civic Fellows awards are made in memory of Frank Newman, who dedicated his life to creating systemic change through education reform. At the core of Newman's leadership was a belief in the power of individuals to make a difference and in the power of connection with others. Newman Civic Fellows form a unique network of leaders who will inspire and keep hope alive for one another during college and afterward, as the network expands exponentially each year.