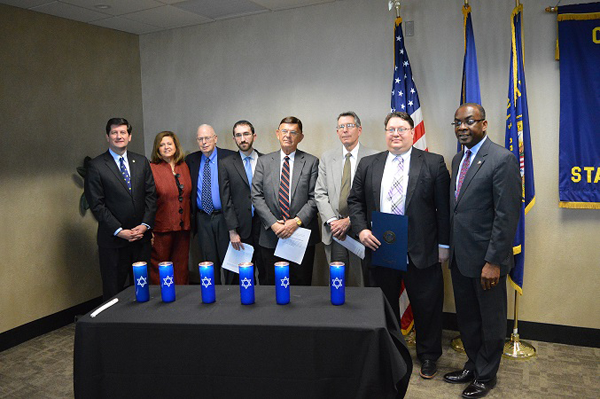 Erie County Executive Mark C. Poloncarz was joined Monday by Buffalo Mayor Byron Brown, members of the Jewish Federation of Greater Buffalo, and leaders of the Jewish community in a candle-lighting ceremony commemorating Yom Hashoah, or Holocaust Memorial Day. The county executive and mayor also issued a joint proclamation declaring the week of May 1-8, 2016, as the Days of Remembrance of the Victims of the Holocaust in Buffalo and Erie County.

"I am honored to be here today and to be joined by Mayor Brown and the Jewish Federation of Greater Buffalo to remember the millions of victims of the Nazi Holocaust. Each year we join together to reaffirm our commitment to ensuring that this crime never happens again," Poloncarz said. "While I am not Jewish, a Polish cousin of my grandfather died by the Nazis' hands in the concentration camp at Auschwitz, one of the millions of people murdered by them. Today, we embrace the memories of those who died while reminding this generation of what happened there and why it must never happen again."

Brown stated, "Today's ceremony recognizes the millions of innocent lives that were lost during one of the darkest chapters in human history, and reminds us of the importance of confronting all forms of hatred so that this never happens again. With recent world events, we've seen that evil still exists and know that it's up to us to confront acts of hatred and violence. In Buffalo, we continue to join together in support of peace and security for our families - which is significant when we remember the horrors of the Holocaust.

"I ask residents today to renew their dedication to preserving the lessons of history. Let us choose to be kind and peaceful to make this world a better place for all."

The ceremony included the lighting of six candles, each one representing a million Jews who were murdered. Poloncarz and Brown were joined in lighting candles by Dr. Sol Messinger, Holocaust survivor and Holocaust Resource Center board member; Howard Rosenhoch, president of the Jewish Federation of Greater Buffalo; Rabbi Josh Strosberg of Kehillat Ohr Tzion; and Reed Taylor, a member of the Holocaust Resource Center board. The lighting of each candle was accompanied by a short commemorative reading.

Israel's Knesset originally established Yom Hashoah as a day to memorialize the 6 million Jews who died at the hands of the Nazis from 1933-45. Ceremonies marking the occasion were held on the 27th day of the month of Nisan, which marks the day when Allied troops liberated the first Nazi concentration camp at Buchenwald, Germany, in 1945. It is also the first month of the ecclesiastical year in the Jewish calendar. Countries around the world include memorial services, poetry readings, lectures and musical presentations as part of their own observances.