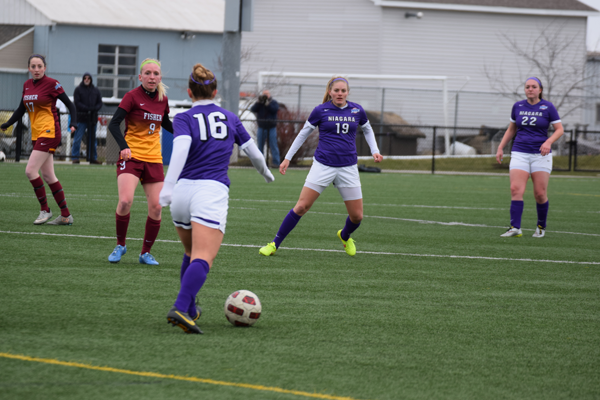 On April 10, Niagara University women's soccer team launched its spring season against St. John Fisher. After finishing in fourth in the Metro Atlantic Athletic Conference last season, much was expected from the Purple Eagles.

Mother Nature was not on NU's side on this April raw day. But that did not stop multitudes of fans from coming out and supporting the athletes.

The first half was rather extreme, as expected by coach Peter Veltri, who will kick off his 20th season this fall. Before the game, he said, "I think the first 20 minutes are going to be crazy, but once the players find their pace, everything should fall back together."

It was Niagara's first exhibition since a contest last fall. After a winter of playing in a gymnasium, not a lot was expected from the players in terms of knowing how to utilize the space in the confines of a standard soccer pitch. Also, what was missing in the first half was composure. Playing in a gymnasium is a completely different game, forcing the players to play in one or two touches, while outside circulating the ball and maintaining position is more of what is demanded.

The anxiety of the first game faded away and the girls could finally put the ball on the floor and possess. The new attitude began to show positive results. The girls ended up scoring three more goals in the second half for a final score of 5-0. Not only did the players show offensive efficiency, but also diversity on the scorer's table. A lot of players who never scored before scored that day.

St. John Fisher is a Division III college. Niagara, being a Division I college, was expected to win over the opponent. However, at multiples times, St. John Fisher appeared to be a threat to Niagara's backline. Overall, they put up a good fight.

Once Niagara got organized, it became difficult for St. John Fisher to keep up. Even though the score tells otherwise, it was not a Niagara domination.

After the game, the players from both sides seemed really content with their performance.

Niagara's Amelia Gulley said, "Everyone looked good out there today. It was our first game and there was a lot of good things. It is really promising for the rest of the spring season and for the fall."

Niagara's squad was missing its five graduating seniors on the field that weekend. The graduating seniors all had an important role on the team and had a direct impact on the results. It was interesting to see how the players performed without these leaders.

Kristina Vassallo said, " It was really fascinating to see new leaders emerge from our new group and also to see new players on the starting lineup. Everybody really showed up today."

Niagara will be back on the field playing its last game of the spring season on Sunday, April 24.

Niagara is preparing for its next fall season, which begins Friday, Aug. 19, at Michigan State University.

Tuesday Jordan from Niagara University, an All-Rookie Team member last season, said, "We are really excited to meet the new freshmen and start to play with them and build for the future seasons. I think we are going to have a really diverse and talented group for the next fall."

Niagara's squad is one of the best groups it's had so far. Everyone is really eager to see them in action. Even though the team will be mostly freshmen, the coaching staff is confident the players will come in ready to step up. Perhaps a MAAC championship is awaiting the Purple Eagles, who have not won a championship since 2006.