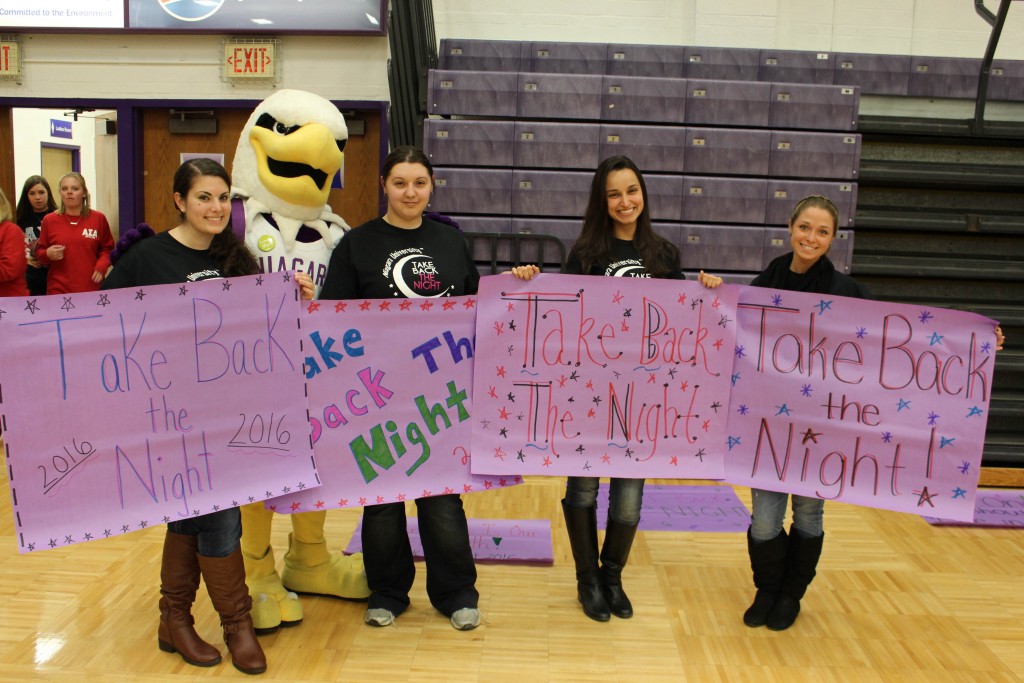 Niagara University students participate in Take Back the Night events on campus.

By Alize Rosado and Madison Ruffo

On April 7, over 400 students at Niagara University joined together in support for Take Back the Night, a national movement whose goal is to create safe communities and respectful relationships through awareness events and initiatives. Seeking to end sexual assault, domestic violence, dating violence, sexual abuse and all other forms of sexual violence, this initiative strove to leave its mark on Niagara's campus.

Organized and led by Dr. Dana Rabatz, assistant professor of criminology and criminal justice, and Dr. Jennifer Beebe, assistant professor of counseling, this event began in the Upper Level Gallagher Center. There were tables set up by various clubs on campus, as well as several other local organizations where students who may be struggling with or witnessing dating violence could go for help.

The event, coupled with YWCA of the Niagara Frontier, started off with several different guest speakers sharing their personal experiences and why they support this cause. Both students and faculty then marched around campus to "take back the night" in support for all victims of sexual abuse. The march then ended at Alumni Hall, where participants entered Niagara's chapel for a vigil service led by students and Campus Ministry.

We caught up with the director of Niagara University ministry, Kristina Daloia, to find out her take on the event. Daloia said the ministry's goal was "to provide awareness and to provide resources."

Being in charge of the prayer vigil, held in Alumni Chapel, Daloia and other participants in the student ministry strove to provide students with a relaxed but meaningful service that really concentrated on the issue at hand.

Take Back the Night was held to emphasize the prevalence of sexual violence and, unfortunately, students were recently reminded of just how real assault can be.

This past Monday evening, a Niagara University student was assaulted off campus near Lafayette Street and Hyde Park Boulevard. The student was taken to Mount St. Mary's Hospital for observation and treatment.

While a tragic event, this helped bring the Niagara community back together and shed light on an unfortunate but relevant issue.

A main goal of the Take Back the Night initiative was to leave a lasting impression on the students at Niagara University and the surrounding community, and that seems to be exactly what it did.

Makayla Kanavy, a freshman at NU and a member of the Human Rights Initiative, summarized just how memorable the event was for her.

"I felt proud of our university," she said as she described her shock at the number of people who not only came out for the event, but were passionate about it. "There were so many people that didn't have to be there that came anyway."

When asked what she learned, Kanavy said, "A lot of people think 'Sexual violence can't happen to me,' but it truly can happen to anyone."

Genuinely enlightened and moved by the event, Kanavy said if there's one thing she took from this event, it's that "educating yourself about the topic is one of the biggest ways you can prevent it."

Michael Pearl, another freshman at NU, worked with Campus Ministry to help organize this event. Pearl described Take Back the Night as a bonding event - one that "bonds all Purple Eagles together; all races, all ethnicities, everyone. This is what Niagara needs, not necessarily a protest or a campaign, but a few moments to remember what Niagara is all about and, more importantly, what being a Vincentian is all about." 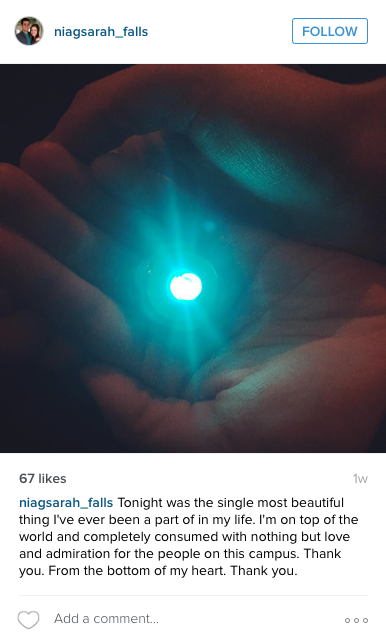 Some students even shared their thoughts on social media. Graduating senior Sarah Joslin Instagrammed a picture of the light students lit in honor of sexual assault victims. She referred to Take Back the Night as "The single most beautiful thing I've ever been a part of in my life."

With a much larger turnout than anyone could have expected, Niagara University and the community came together to raise awareness for sexual violence and helped make a lasting impact on students.

Organizers of Take Back the Night hope to make it an annual event and do even more on campus to get students involved - and to spread the message that they're not in this alone.

To learn more about Take Back the Night, visit its website at http://takebackthenight.org.