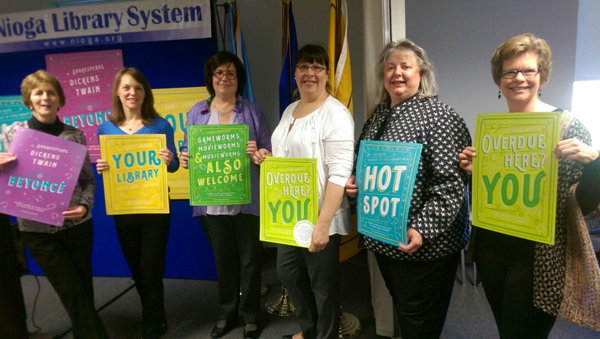 Campaign promises, 'There's More to Check Out' at your local library

NIOGA, a nonprofit cooperative library system, is launching a new campaign aimed at young adults in Niagara, Orleans and Genesee counties to call their attention to the vast resources available at their local library, including free Wi-Fi, video games, music and video streaming, and eBook downloads.

"Libraries nationally are facing tough competition as on-demand technology becomes more and more accessible," said Tom Bindeman, executive director of NIOGA Library System. "But the advantage that libraries have is that we offer the same content for free. We just need to make more people aware of that."

NIOGA will launch its "There's More to Check Out" campaign on April 11, just in time for National Library Week. Twenty libraries will participate in the campaign, which features a series of posters, social media and Web content, and a contest.

A core component of NIOGA's new campaign is the "Check Out Challenge" in which young adults - or any interested individuals - are encouraged to complete a series of tasks at their local library (such as streaming free music, checking out a newly released video game or movie, connecting to the free Wi-Fi, or taking a selfie and posting it to social media using the hashtag #CheckOutChallenge) for the chance to win prizes. The grand prize awarded will be an iPad Air 2, second prize will be an Xbox One, and third prize will be Beats by Dre headphones. Those wishing to participate can pick up a challenge card from their local library beginning April 11.

"We're excited to launch this campaign to draw attention to our youth-oriented programs and reintroduce millennials to the library," said Sue Border, director of the Woodward Memorial Library in LeRoy. "Whether it's unique programs and events or the free access to invaluable resources you'd be charged for anywhere else, there's really so much more to check out at your local library."

For more information about the campaign and contest, visit CheckOutChallenge.com.

The NIOGA Library System, chartered in 1959, is a nonprofit cooperative library system serving the public libraries in Niagara, Orleans and Genesee counties. The system, which consists of 21 public libraries, takes its name from the counties it serves. For more information, and for a list of the libraries in the system, visit http://nioga.ent.sirsi.net/client/default.